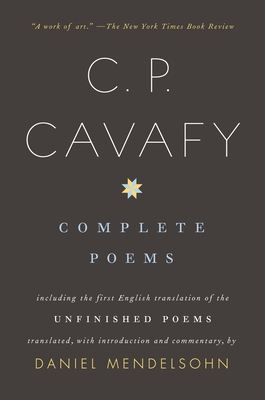 Including the First English Translation of the Unfinished Poems

An extraordinary literary event: Daniel Mendelsohn’s acclaimed two-volume translation of the complete poems of C. P. Cavafy—including the first English translation of the poet’s final Unfinished Poems—now published in one handsome edition and featuring the fullest literary commentaries available in English, by the renowned critic, scholar, and international best-selling author of The Lost.
No modern poet so vividly brought to life the history and culture of Mediterranean antiquity; no writer dared break, with such taut energy, the early-twentieth-century taboos surrounding homoerotic desire; no poet before or since has so gracefully melded elegy and irony as the Alexandrian Greek poet Constantine Cavafy (1863–1933). Whether advising Odysseus on his return to Ithaca or confronting the poet with the ghosts of his youth, these verses brilliantly make the historical personal—and vice versa. To his profound exploration of longing and loneliness, fate and loss, memory and identity, Cavafy brings the historian’s assessing eye along with the poet’s compassionate heart.
After more than a decade of work and study, Mendelsohn—a classicist who alone among Cavafy’s translators shares the poet’s deep intimacy with the ancient world—gives readers full access to the genius of Cavafy’s verse: the sensuous rhymes, rich assonances, and strong rhythms of the original Greek that have eluded previous translators. Complete with the Unfinished Poems that Cavafy left in drafts when he died—a remarkable, hitherto unknown discovery that remained in the Cavafy Archive in Athens for decades—and with an in-depth introduction and a helpful commentary that situates each work in a rich historical, literary, and biographical context, this revelatory translation is a cause for celebration: the definitive presentation of Cavafy in English.

Praise For Complete Poems: Including the First English Translation of the Unfinished Poems…

“Cavafy’s distinctive tone—wistfully elegiac but resolutely dry-eyed—has captivated English-language poets from W. H. Auden to James Merrill to Louise Glück. . . . Mendelsohn’s new translations not only bring us closer to one of the great poets of the twentieth century; [they] also reinvigorate our relationship to the English language . . . Like Richard Howard’s Baudelaire or Robert Pinsky’s Dante, Mendelsohn’s Cavafy is itself a work of art.” —The New York Times Book Review

“Brilliant . . . With his passionate reading of this poet-historian . . . Mendelsohn has created not only an essential guide to Cavafy for English-speaking readers, but has likely shaped our understanding of the greatest writer of modern Greek for generations to come.” —Boston Review

“Eloquent . . . [This is] the Cavafy of a brilliant critic who has a true and deep affinity for the poet—and who has succeeded in giving him to us whole for the first time.” —The Nation

“Thrilling . . . Mendelsohn is such a felicitous interpreter of Cavafy . . . The explanatory essays he has attached to almost every poem can contain every bit as much passion and humanity as the poet’s own work.” —Harper’s Magazine

“Superb . . . Mendelsohn’s translations are not only skillful, but elegant; best of all, they catch the music of the originals.” —The New Criterion

“A vigorous labor of literary love . . . The poems fully embody Cavafy the sensualist and the antiquarian and his distinctive lyric shuttling between the ancient and the modern worlds.” —Billy Collins

“With deep feeling, exacting care, and extraordinary intelligence, Mendelsohn has given us a stunning new Cavafy . . . All of us who care about literature are indebted to Mendelsohn for bringing forward a splendid addition to our understanding of a poet whose work is lit by bright starry sparks of the eternal.” —Edward Hirsch

Daniel Mendelsohn was born on Long Island and studied classics at the University of Virginia and at Princeton. His reviews and essays on literary and cultural subjects appear frequently in The New Yorker and The New York Review of Books. His books include a memoir, The Elusive Embrace, a New York Times Notable Book and a Los Angeles Times Best Book of the Year; the international best seller The Lost: A Search for Six of Six Million; and a collection of essays, How Beautiful It Is and How Easily It Can Be Broken. He teaches at Bard College.
Loading...
or support indie stores by buying on