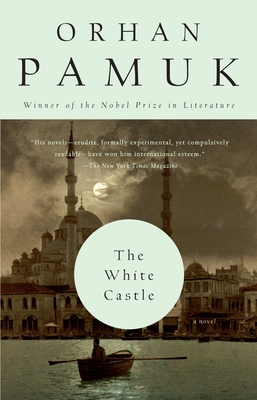 From a Turkish writer who has been compared with Borges, Nabokov, and DeLillo comes a dazzling novel that is at once a captivating work of historical fiction and a sinuous treatise on the enigma of identity and the relations between East and West. In the 17th century, a young Italian scholar sailing from Venice to Naples is taken prisoner and delivered to Constantinople. There he falls into the custody of a scholar known as Hoja--"master"--a man who is his exact double. In the years that follow, the slave instructs his master in Western science and technology, from medicine to pyrotechnics. But Hoja wants to know more: why he and his captive are the persons they are and whether, given knowledge of each other's most intimate secrets, they could actually exchange identities. Set in a world of magnificent scholarship and terrifying savagery, The White Castle is a colorful and intricately patterned triumph of the imagination. Translated from the Turkish by Victoria Holbrook.

Orhan Pamuk is the author of seven novels and the recipient of major Turkish and international literary awards. He is one of Europe's most prominent novelists, and his work has been translated into twenty-six languages. He lives in Istanbul.
Loading...
or support indie stores by buying on