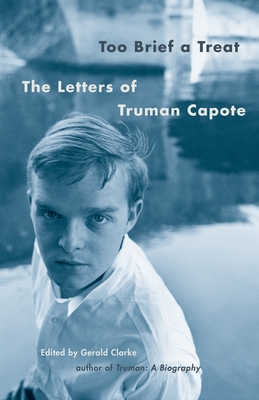 Too Brief a Treat

The private letters of Truman Capote, lovingly assembled here for the first time by acclaimed Capote biographer Gerald Clarke, provide an intimate, unvarnished portrait of one of the twentieth century’s most colorful and fascinating literary figures.
Capote was an inveterate letter writer. He wrote letters as he spoke: emphatically, spontaneously, and passionately. Spanning more than four decades, his letters are the closest thing we have to a Capote autobiography, showing us the uncannily self-possessed naïf who jumped headlong into the post–World War II New York literary scene; the more mature Capote of the 1950s; the Capote of the early 1960s, immersed in the research and writing of In Cold Blood; and Capote later in life, as things seem to be unraveling. With cameos by a veritable who’s who of twentieth-century glitterati, Too Brief a Treat shines a spotlight on the life and times of an incomparable American writer.


Praise For Too Brief a Treat: The Letters of Truman Capote (Vintage International)…

“Here we see Capote at his witchy, bitchy best, leaving us longing for more.” —The Washington Post World

“Chatty, funny, affectionate and wildly interested in the big world—the bigger the better—Capote the correspondent is irresistible.” —Newsday

Gerald Clarke is the author of Capote: A Biography and Get Happy: The Life of Judy Garland. He has also written for many publications, including Architectural Digest, Time, where he was a senior writer, and Esquire. A graduate of Yale, he now lives in Bridgehampton, New York.
Loading...
or support indie stores by buying on