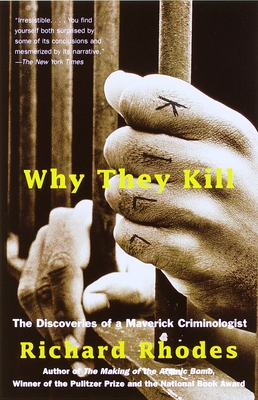 Why They Kill (Paperback)

The Discoveries of a Maverick Criminologist

Richard Rhodes, Pulitzer Prize-winning author of The Making of the Atomic Bomb, brings his inimitable vision, exhaustive research, and mesmerizing prose to this timely book that dissects violence and offers new solutions to the age old problem of why people kill.

Lonnie Athens was raised by a brutally domineering father.  Defying all odds, Athens became a groundbreaking criminologist who turned his scholar's eye to the problem of why people become violent.  After a decade of interviewing several hundred violent convicts--men and women of varied background and ethnicity, he discovered "violentization," the four-stage process by which almost any human being can evolve into someone who will assault, rape, or murder another human being.  Why They Kill is a riveting biography of Athens and a judicious critique of his seminal work, as well as an unflinching investigation into the history of violence.

Praise For Why They Kill: The Discoveries of a Maverick Criminologist…

"Irresistible. . . . You find yourself both surprised by some of its conclusions and mesmerized by its narrative." --The New York Times

"Unsettling, challenging, but never less than fascinating." --The Seattle Times


"Rhodes should be commended . . . not only for writing another wonderful book, but also for bringing to light the provocative scholarship of Lonnie Athens." -The Atlanta Journal-Constitution

"Certain to be controversial, Why They Kill is an engrossing book on a crucial issue." --The Kansas City Star
or support indie stores by buying on
Copyright © 2020 American Booksellers Association