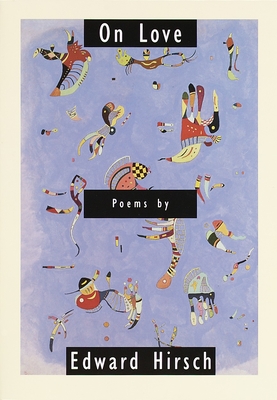 "Life has to have the plenitude of art," Edward Hirsch affirms in his fifth volume of poems, On Love, which further establishes him as a major artist. From its opening epigraph by Thomas Hardy and an initiating prayer for transformation, On Love takes up the subjects of separateness and fusion, autonomy and blur. The initial progression of fifteen shapely and passionate lyrics (including a sonnet about the poet at seven, a villanelle about the loneliness of a pioneer woman on the prairie, and an elegy for Amy Clampitt) opens out into a sequence of meditations about love. These arresting love poems are spoken by a gallery of historical figures from Denis Diderot, Heinrich Heine, Charles Baudelaire, and Ralph Waldo Emerson to Gertrude Stein, Federico Garcia Lorca, Zora Neale Hurston, and Colette. Each anatomizes a different aspect of eros in poems uttered by a chorus of historical authorities that is also a lone lover's yearning voice. Personal, literary, On Love offers the most formally adept and moving poetry by the author Harold Bloom hails as utterly fresh, canonical, and necessary.

Edward Hirsch was born in Chicago in 1950 and educated at Grinnell College and the University of Pennsylvania. His first book of poems, For the Sleepwalkers (1981), received the Lavan Younger Poets Award from the Academy of American Poets and the Delmore Schwartz Memorial Award from New York University. His second book of poems, Wild Gratitude (1986), received the National Book Critics Circle Award. His third, The Night Parade (1989), and his fourth, Earthly Measures (1994), were both listed as notable books of the year by the New York Times Book Review. He writes frequently for leading magazines and periodicals--among them American Poetry Review, DoubleTake, where he is editorial advisor in poetry, and The Paris Review--and he has received a National Endowment for the Arts Fellowship, an Ingram Merrill Award, a Guggenheim Fellowship, and the Rome Prize from the American Academy and Institute of Arts and Letters. He teaches at the University of Houston.
Loading...
or
Not Currently Available for Direct Purchase