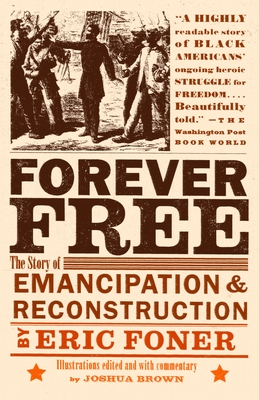 The Story of Emancipation and Reconstruction

From one of our most distinguished historians comes a groundbreaking new examination of the myths and realities of the period after the Civil War.

Drawing on a wide range of long-neglected documents, Eric Foner places a new emphasis on black experiences and roles during the era. We see African Americans as active agents in overthrowing slavery, in shaping Reconstruction, and creating a legacy long obscured and misunderstood. He compellingly refutes long-standing misconceptions of Reconstruction, and shows how the failures of the time sowed the seeds of the Civil Rights struggles of the 1950s and 60s. Richly illustrated and movingly written, this is an illuminating and essential addition to our understanding of this momentous era.

Eric Foner is the DeWitt Clinton Professor of History at Columbia University. His special area of study has been the Civil War and Reconstruction, slavery, and 19th-century America. Among his dozen books is Reconstruction: America's Unfinished Revolution, 1863-1877, widely considered to be the definitive work on Reconstruction, which won the Los Angeles Times Book Award for History, the Bancroft Prize, and the Parkman Prize, among other honors. He served as president of the American Historical Association in 2000 and has been a member of the American Academy of Arts and Sciences since 1989. He reviews books frequently for the Los Angeles Times, The New York Times, and The Washington Post.

Joshua Brown is executive director of the American Social History Project/Center for Media and Learning at the Graduate Center, City University of New York. He is the author of Beyond the Lies, a book on gilded-age America, and co-author of the interactive CD-ROMS and groundbreaking textbook (1990, 2000) Who Built America? He is also the coexecutive producer of the noted Web projects "History Matters" and "The September 11 Digital Archive."

Praise For Forever Free: The Story of Emancipation and Reconstruction…

“A highly readable story of black Americans’ ongoing heroic struggle for freedom . . . Beautifully told.” –The Washington Post Book World“Passionate, lucid, concise without being light. . . . Foner traces the lines of race and politics that run from Reconstruction to the age of segregation to the civil rights movement to our own time.” –The New York Times Book Review“Foner delves deeply into the politics of the time, to be sure, but he spends much more time showing how political decisions affected real people. . . . This book has the potential to become a model for future history books that target a broader audience.” –The Washington Monthly“African Americans emerge as political powerful actors in Forever Free. In [these] vivid pages . . . we become acquainted with these extraordinary people, some well-known, some virtually unknown.” –The New Republic
or
Buy Here
Copyright © 2020 American Booksellers Association