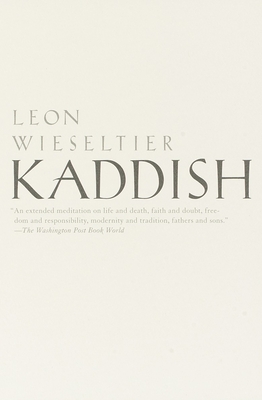 Children have obligations to their parents: the Talmud says "one must honor him in life and one must honor him in death." Beside his father’s grave, a diligent but doubting son begins the mourner’s kaddish and realizes he needs to know more about the prayer issuing from his lips. So begins Leon Wieseltier’s National Jewish Book Award–winning autobiography, Kaddish, the spiritual journal of a man commanded by Jewish law to recite a prayer three times daily for a year and driven, by ardor of inquiry, to explore its origins. Here is one man’s urgent exploration of Jewish liturgy and law, from the 10th-century legend of a wayward ghost to the speculations of medieval scholars on the grief of God to the perplexities of a modern rabbi in the Kovno ghetto. Here too is a mourner’s unmannered response to the questions of fate, freedom, and faith stirred in death’s wake. Lyric, learned, and deeply moving, Wieseltier’s Kaddish is a narrative suffused with love: a son’s embracing the tradition bequeathed to him by his father, a scholar’s savoring they beauty he was taught to uncover, and a writer’s revealing it, proudly, unadorned, to the reader.

"An astonishing fusion of learning and psychic intensity; its poignance and lucidity should be an authentic benefit to readers, Jewish and gentile." —The New York Times Book Review

"Extraordinary.... [Kaddish] is a fine book, no, more: It may well be destined to become an American Jewish classic." --Forward

"Read this extraordinary book and you will be both intellectually enriched and deeply moved.... [Wieseltier's] Kaddish is not only for his father; it is for all fathers for whom no kaddish has been said." --Elie Wiesel

"An extended meditation on life and death, faith and doubt, freedom and responsibility,  modernity and tradition, fathers and sons." --The Washington Post Book World

Leon Wieseltier was born in Brooklyn in 1952. He is the literary editor of The New Republic. He has published several books, including A Passion for Waiting, Jewish Historiography, and Kaddish, winner of the 1998 National Jewish Book Award. He currently lives in Washington, D.C.
Loading...
or support indie stores by buying on