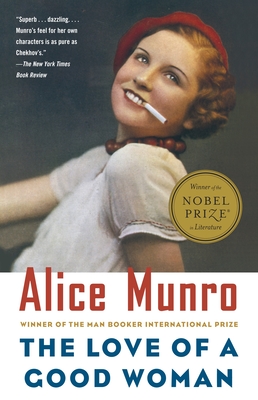 The Love of a Good Woman

In eight new stories, a master of the form extends and magnifies her great themes--the vagaries of love, the passion that leads down unexpected paths, the chaos hovering just under the surface of things, and the strange, often comical desires of the human heart.

Time stretches out in some of the stories: a man and a woman look back forty years to the summer they met--the summer, as it turns out, that the true nature of their lives was revealed. In others time is telescoped: a young girl finds in the course of an evening that the mother she adores, and whose fluttery sexuality she hopes to emulate, will not sustain her--she must count on herself.

Some choices are made--in a will, in a decision to leave home--with irrevocable and surprising consequences. At other times disaster is courted or barely skirted: when a mother has a startling dream about her baby; when a woman, driving her grandchildren to visit the lakeside haunts of her youth, starts a game that could have dangerous consequences. The rich layering that gives Alice Munro's work so strong a sense of life is particularly apparent in the title story, in which the death of a local optometrist brings an entire town into focus--from the preadolescent boys who find his body, to the man who probably killed him, to the woman who must decide what to do about what she might know. Large, moving, profound--these are stories that extend the limits of fiction.

Praise For The Love of a Good Woman: Stories (Vintage International)…

Superb...Long ago, Virginia Woolf described George Eliot as one of the few writers 'for grown-up people.' The same might today, and with equal justice, be said of Alice Munro.--Michael Gorra, New York Times Book Review

A writer for the ages--Dan Cryer, Newsday

Alice Munro is indisputably a master. Like all great writers, she helps sharpen perception...Her imagination is fearless...A better book of stories can scarcely be imagined.--Greg Varner, Washington Post Book World

A triumph...certain to seal her reputation as our contemporary Chekhov--Carol Shields, Mirabella

Superlative...She distills a novel's worth of dramatic events into a story of 20 pages.--Erik Huber, Time OutM

These astonishing stories remind us, yet again, of the literary miracles Alice Munro continues to perform.--Francine Prose, Elle