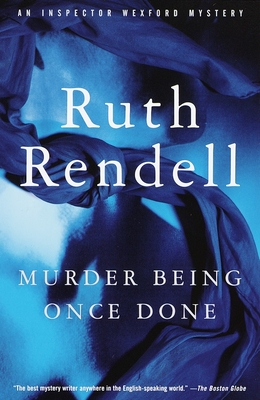 Murder Being Once Done (Inspector Wexford #7)

A young girl is murdered in a cemetery.  And Wexford's doctor has prescribed no alcohol, no rich food and, above all, no police work.  When a young girl's body is found in a London cemetery and the local police, under the command of Wexford's nephew, are baffled, Wexford decides to brave his doctor's wrath and the condescension of the London police by doing a little investigating of his own. A compelling story of mysterious identity and untimely death, Murder Being Once Done is Rendell at her most sublime.

With her Inspector Wexford novels, Ruth Rendell, winner of the Mystery Writers of America Grand Master Award, has added layers of depth, realism and unease to the classic English mystery. For the canny, tireless, and unflappable policeman is an unblinking observer of human nature, whose study has taught him that under certain circumstances the most unlikely people are capable of the most appalling crimes.

Praise For Murder Being Once Done (Inspector Wexford #7)…

"Chief Inspector Wexford is one of the most admirable presences in mystery fiction today and Ruth Rendell. . . retains her place of highest distinction in the field."
--The New York Times Book Review

"Rendell is a master of the form.
--The Washington Post Book World

"Undoubtedly one of the best writers of English mysteries and chiller-killer plots."
--Los Angeles Times

"The best mystery writer anywhere in the English-speaking world."
--The Boston Globe

Ruth Rendell is the author of Road Rage, The Keys to the Street, Bloodlines, Simisola, and The Crocodile Bird. She is the winner of the Mystery Writers of America Grand Master Award. She is also the recipient of three Edgars from the Mystery Writers of America and four Gold Daggers from Great Britain’s Crime Writers Association. In 1997, she was named a life peer in the House of Lords. Ruth Rendell also writes mysteries under the name of Barbara Vine, of which A Dark Adapted Eye is the most famous. She lives in England.
Loading...
or support indie stores by buying on