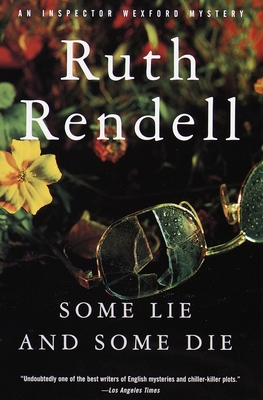 Some Lie and Some Die (Inspector Wexford #8)

A mutilated body found at a rock festival.

In spite of dire predictions, the rock festival in Kingsmarkham seemed to be going off without a hitch, until the hideously disfigured body is discovered in a nearby quarry. And soon Wexford is investigating the links between a local girl gone bad and a charismatic singer who inspires an unwholesome devotion in his followers. Some Lie and Some Die is a devilishly absorbing novel, in which Wexford's deductive powers come up against the aloof arrogance of pop stardom.

With her Inspector Wexford novels, Ruth Rendell, winner of the Mystery Writers of America Grand Master Award, has added layers of depth, realism and unease to the classic English mystery. For the canny, tireless, and unflappable policeman is an unblinking observer of human nature, whose study has taught him that under certain circumstances the most unlikely people are capable of the most appalling crimes.

Praise For Some Lie and Some Die (Inspector Wexford #8)…

"No one can take you so totally into the recesses of the human mind as does Ruth Rendell."
--The Christian Science Monitor

"Undoubtedly one of the best writers of English mysteries and chiller-killer plots."
--Los Angeles Times

Ruth Rendell is the author of Road Rage, The Keys to the Street, Bloodlines, Simisola, and The Crocodile Bird. She is the winner of the Mystery Writers of America Grand Master Award. She is also the recipient of three Edgars from the Mystery Writers of America and four Gold Daggers from Great Britain’s Crime Writers Association. In 1997, she was named a life peer in the House of Lords. Ruth Rendell also writes mysteries under the name of Barbara Vine, of which A Dark Adapted Eye is the most famous. She lives in England.
Loading...
or support indie stores by buying on
(This book is on backorder)