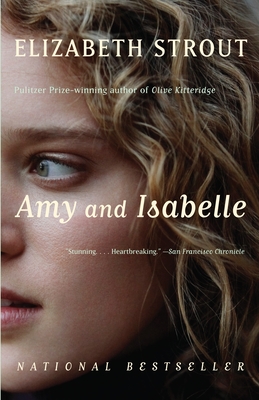 Before there was Olive Kitteridge, there was Amy and Isabelle…

“A novel of shining integrity and humor, about the bravery and hard choices of what is called ordinary life.”—Alice Munro

Pulitzer Prize winning author Elizabeth Strout’s bestselling and award winning debut, Amy and Isabelle—adapted for television by Oprah Winfrey— evokes a teenager's alienation from her distant mother—and a parent's rage at the discovery of her daughter's sexual secrets.

In most ways, Isabelle and Amy are like any mother and her 16-year-old daughter, a fierce mix of love and loathing exchanged in their every glance. That they eat, sleep, and work side by side in the gossip-ridden mill town of Shirley Falls—a location fans of Strout will recognize from her critically acclaimed novel, The Burgess Boys—only increases the tension. And just when it appears things can't get any worse, Amy's sexuality begins to unfold, causing a vast and icy rift between mother and daughter that will remain unbridgeable unless Isabelle examines her own secretive and shameful past.
A Reader's Guide is included in the paperback edition of this powerful first novel by the author who brought Olive Kitteridge to millions of readers.

Praise For Amy and Isabelle: A novel (Vintage Contemporaries)…

"One of those rare, invigorating books that take an apparently familiar world and peer into it with ruthless intimacy, revealing a strange and startling place." -- The New York Times Book Review

"Strout's insights into the complex psychology bewteen [mother and daughter] result in a poignant tale about two coming of age." --Time

"Poignant...sensitively imagined...[Amy and Isabelle] recalls the elgegiac charm of Our Town." --The Christian Science Monitor

"Stunning....Every once in a while, a novel comes along that plunges deep into your psyche, leaving you breathless....This year that novel is Amy and Isabelle." --San Francisco Chronicle

"A novel of shining integrity and humor, about the bravery and hard choices of what is called ordinary life." --Alice Munro

"Excellent....Strout's collective portrait...remains unflaggingly engaging....[W]hat a pleasure to gain entry into the world of this book." --The New Yorker

"Amy and Isabelle is an impressive debut....with an expansiveness and inventiveness that is the mark of a true storyteller." --The Philadelphia Inquirer

Elizabeth Strout is the #1 New York Times bestselling author of Olive Kitteridge, winner of the Pulitzer Prize; Olive, Again, an Oprah’s Book Club pick; Anything Is Possible, winner of the Story Prize; My Name Is Lucy Barton, longlisted for the Man Booker Prize; The Burgess Boys, named one of the best books of the year byThe Washington Post and NPR; Abide with Me, a national bestseller; and Amy and Isabelle, winner of the Los Angeles Times Art Seidenbaum Award for First Fiction and the Chicago Tribune Heartland Prize. She has also been a finalist for the National Book Critics Circle Award, the PEN/Faulkner Award for Fiction, the International Dublin Literary Award, and the Orange Prize. Her short stories have been published in a number of magazines, including The New Yorker and O: The Oprah Magazine. Elizabeth Strout lives in New York City.
Loading...
or support indie stores by buying on
(This book is on backorder)