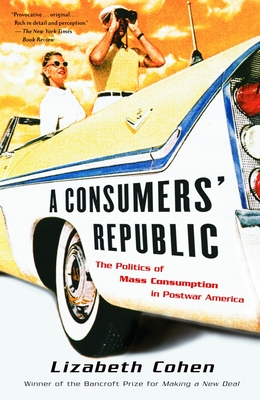 The Politics of Mass Consumption in Postwar America

Trumpeted as a means to promote the general welfare, mass consumption quickly outgrew its economic objectives and became synonymous with patriotism, social equality, and the American Dream. Material goods came to embody the promise of America, and the power of consumers to purchase everything from vacuum cleaners to convertibles gave rise to the power of citizens to purchase political influence and effect social change. Yet despite undeniable successes and unprecedented affluence, mass consumption also fostered economic inequality and the fracturing of society along gender, class, and racial lines. In charting the complex legacy of our “Consumers’ Republic” Lizabeth Cohen has written a bold, encompassing, and profoundly influential book.

Praise For A Consumers' Republic: The Politics of Mass Consumption in Postwar America…

“A sobering book—and an essential one. . . . Broadly ambitious. . . . The first historical account to examine closely the social world of postwar consumerism and the politics that were so tightly enmeshed with it.” —The American Prospect

Lizabeth Cohen is Howard Mumford Jones Professor of American Studies in the Department of History at Harvard University. She is the author of Making a New Deal: Industrial Workers in Chicago, 1919—1939, which won the Bancroft Prize and the Philip Taft Labor History Award and was a finalist for the Pulitzer Prize. She has written many articles and essays and is coauthor (with David Kennedy) of The American Pageant. She lives in Belmont, Massachusetts, with her husband and two daughters.
Loading...
or support indie stores by buying on