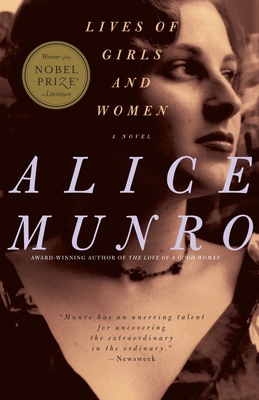 Lives of Girls and Women

The only novel from Alice Munro-award-winning author of The Love of a Good Woman--is an insightful, honest book, "autobiographical in form but not in fact," that chronicles a young girl's growing up in rural Ontario in the 1940's.

Del Jordan lives out at the end of the Flats Road on her father's fox farm, where her most frequent companions are an eccentric bachelor family friend and her rough younger brother. When she begins spending more time in town, she is surrounded by women-her mother, an agnostic, opinionted woman who sells encyclopedias to local farmers; her mother's boarder, the lusty Fern Dogherty; and her best friend, Naomi, with whom she shares the frustrations and unbridled glee of adolescence.

Through these unwitting mentors and in her own encounters with sex, birth, and death, Del explores the dark and bright sides of womanhood. All along she remains a wise, witty observer and recorder of truths in small-town life. The result is a powerful, moving, and humorous demonstration of Alice Munro's unparalleled awareness of the lives of girls and women.

Praise For Lives of Girls and Women: A Novel (Vintage International)…

?Munro has an unerring talent for uncovering the extraordinary in the ordinary.??Newsweek