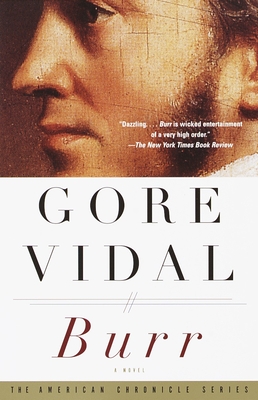 For readers who can’t get enough of the hit Broadway musical Hamilton, Gore Vidal’s stunning novel about Aaron Burr, the man who killed Alexander Hamilton in a duel—and who served as a successful, if often feared, statesman of our fledgling nation.

Here is an extraordinary portrait of one of the most complicated—and misunderstood—figures among the Founding Fathers. In 1804, while serving as vice president, Aaron Burr fought a duel with his political nemesis, Alexander Hamilton, and killed him. In 1807, he was arrested, tried, and acquitted of treason. In 1833, Burr is newly married, an aging statesman considered a monster by many. But he is determined to tell his own story, and he chooses to confide in a young New York City journalist named Charles Schermerhorn Schuyler. Together, they explore both Burr's past—and the continuing civic drama of their young nation.

Burr is the first novel in Gore Vidal's Narratives of Empire series, which spans the history of the United States from the Revolution to post-World War II. With their broad canvas and sprawling cast of fictional and historical characters, these novels present a panorama of American politics and imperialism, as interpreted by one of our most incisive and ironic observers.

"A tragedy, a comedy, a vibrant, leg-kicking life. . . . All of this and much, much more is told in a highly engaging book that teems with bon mots, aphorisms and ironic comments on the political process. . . . Enlightening, fresh and fun."  --The Boston Globe

"A novel of Stendhalian proportions. . . . It is probably impossible to be an American and not be fascinated and impressed by Vidal's telescoping of our early history. . . . Always absorbing." --The New Yorker

Gore Vidal (1925–2012) was born at the United States Military Academy at West Point. His first novel, Williwaw, written when he was 19 years old and serving in the army, appeared in the spring of 1946. He wrote 23 novels, five plays, many screenplays, short stories, well over 200 essays, and a memoir.
Loading...
or support indie stores by buying on
(This book is on backorder)