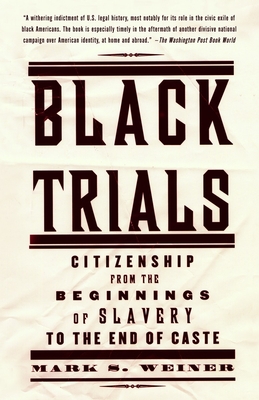 Citizenship from the Beginnings of Slavery to the End of Caste

From a brilliant young legal scholar comes this sweeping history of American ideas of belonging and citizenship, told through the stories of fourteen legal cases that helped to shape our nation.
Spanning three centuries, Black Trials details the legal challenges and struggles that helped define the ever-shifting identity of blacks in America. From the well-known cases of Plessy v. Ferguson and the Clarence Thomas confirmation hearings to the more obscure trial of Joseph Hanno, an eighteenth-century free black man accused of murdering his wife and bringing smallpox to Boston, Weiner recounts the essential dramas of American identity—illuminating where our conception of minority rights has come from and where it might go. Significant and enthralling, these are the cases that forced the courts and the country to reconsider what it means to be black in America, and Mark Weiner demonstrates their lasting importance for our society.


Praise For Black Trials: Citizenship from the Beginnings of Slavery to the End of Caste…

“The choices that Weiner makes . . . reveal not a little bravery of the intellectual variety . . . [He] is excellent at spinning these yarns. He creates genuine drama.”
–Justin Driver, The New Republic

“Serious, deeply felt . . . This book is the best of its kind.”
–Publishers Weekly

“A withering indictment of U.S. legal history, most notably for its role in the civic exile of black Americans.  The book is especially timely in the aftermath of another divisive national campaign over American identity, at home and abroad.”-The Washington Post Book World

"Lively and enlightening….Weiner’s book rises above most scholarly efforts because of his girl for storytelling….Highly accessible and fascinating."-The American Lawyer

Mark S. Weiner was born and raised in Los Angeles. After graduating from Stanford University, he received a Ph.D. in American studies and a law degree from Yale. He now teaches constitutional law, legal history, and legal ethics at Rutgers School of Law in Newark, New Jersey.
Loading...
or
Not Currently Available for Direct Purchase