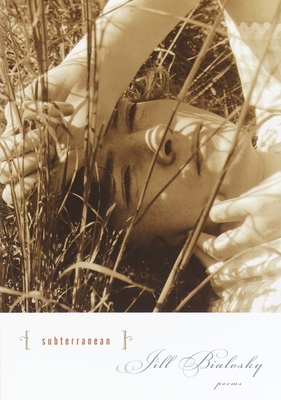 Jill Bialosky follows her acclaimed debut collection, The End of Desire, with this powerful sequence of poems that probes the subterranean depths of eros. Gerald Stern has called Bialosky “the poet of the secret garden, the place, at once, of grace and sadness,” and here she enters that garden again, blending the classical with the contemporary in bold considerations of desire, fertility, virginity, and childbirth. Written against the idealizations of romantic love and motherhood, she tells of the loss of one child and the birth of another, the fierce passions of life before children, the seductions of suicide, and the comforts of art. Throughout, she braids and unbraids the distinct yet often inseparable themes of motherhood, love, and sexuality. “When he comes to me,” she writes,

half-filled glass
in his hand, wanting
me to touch him, I hear
you stir in your crib. I know what your body
feels like.
The soft skin of a flower, not bruised, not yet
in torment . . .

Subterranean is the moving and intimate account of the emergence of a female psyche. Like the figures of Persephone and Demeter, who appear in various forms in these poems, Bialosky finds a strange beauty in grief, and emerges from the realms of temptation with insight and distinction.

"Jill Bialosky slips Persephone's pomegranate seeds into her own poet's hand, then dives deep in Subterranean, locating fragments of girlhood and womanhood to assemble into a mythic underworld collage. If Beatrice herself were a suburban American girl who preceded Dante on his journey, these lyrics might be what she would tell us. You never get to heaven without the descent, as she, the Greek gods, and Jill Bialosky know very well--and we come to know through this alluring, surprising second volume of poems, where this poet comes into her own."
--Molly Peacock


"Bialosky takes certain essentialities--spring and winter, suffering and desire, the surface life and the sweetly subtle pull of the life below--and makes them achingly local. The poems in SUBTERRANEAN reveal one woman's psychic territory, lucidly and passionately mapped."
--Kim Addonizio

"Jill Bialosky's second book of poems, SUBTERRANEAN, is an advance in psychic depth and expressive eloquence beyond her distinguished THE END OF DESIRE. Her new work fully establishes her voice: poignant, perilous, overwhelmingly aware of the extent to which our lives, inner and outer, are deflected by contingency, and by drives of love and death that govern us."
--Harold Bloom

Jill Bialosky was born in Cleveland, Ohio. She studied at Ohio University and received a Master of Arts from Johns Hopkins University and a Master of Fine Arts from the University of Iowa. Her first book, The End of Desire, was published by Knopf in 1997, and her poems appear regularly in journals such as Paris Review, American Poetry Review, Agni Review, and The New Republic. Bialosky is an editor at W. W. Norton and teaches at Columbia University; she lives in New York City with her husband and son.
Loading...
or
Not Currently Available for Direct Purchase