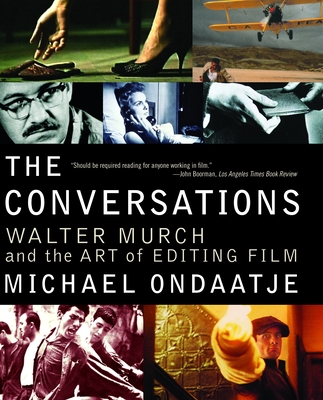 Walter Murch and the Art of Editing Film

The Conversations is a treasure, essential for any lover or student of film, and a rare, intimate glimpse into the worlds of two accomplished artists who share a great passion for film and storytelling, and whose knowledge and love of the crafts of writing and film shine through.

It was on the set of the movie adaptation of his Booker Prize-winning novel, The English Patient, that Michael Ondaatje met the master film and sound editor Walter Murch, and the two began a remarkable personal conversation about the making of films and books in our time that continued over two years. From those conversations stemmed this enlightened, affectionate book -- a mine of wonderful, surprising observations and information about editing, writing and literature, music and sound, the I-Ching, dreams, art and history.

The Conversations is filled with stories about how some of the most important movies of the last thirty years were made and about the people who brought them to the screen. It traces the artistic growth of Murch, as well as his friends and contemporaries -- including directors such as Francis Ford Coppola, George Lucas, Fred Zinneman and Anthony Minghella -- from the creation of the independent, anti-Hollywood Zoetrope by a handful of brilliant, bearded young men to the recent triumph of Apocalypse Now Redux.

Among the films Murch has worked on are American Graffiti, The Conversation, the remake of A Touch of Evil, Julia, Apocalypse Now, The Godfather (all three), The Talented Mr. Ripley, and The English Patient.

“Walter Murch is a true oddity in Hollywood. A genuine intellectual and renaissance man who appears wise and private at the centre of various temporary storms to do with film making and his whole generation of filmmakers. He knows, probably, where a lot of the bodies are buried.”

Praise For The Conversations: Walter Murch and the Art of Editing Film…

"Immensely stimulating....This book should be required reading for anyone working in film and a pleasurable option for moviegoers who wish to deepen and enrich the experience." -- John Boorman, director of Deliverance, Hope and Glory and Excalibur, reviewing The Conversations in the LA Times

“As the subject of Michael Ondaatje’s offbeat, exhilarating new book, [Walter Murch] makes poetry out of an arcane, invisible craft…. Readers with even a passing interest in the movies should find many pleasures here…. The Conversations should be required reading for every aspiring writer -- and anyone else involved in learning to shape a work of art.” -- Quill & Quire

“Here's one of the more interesting cross-disciplinary meetings of minds to hit book form in some time…. In a series of long conversations recorded over a two-year period, Ondaatje and Murch, both highly intelligent and thoughtful artists, transcend the interview-book genre by following tangents, engaging in arguments, contextualizing everything and reminiscing…. this is compulsive and compulsory reading for anyone in film school or interested in film history." -- NOW

“The Conversations is an homage and an exegesis -- effortlessly inquiring and creative. Constructed as a sequence of five discursive interviews … The Conversations is companionable, but not excluding, and intellectually exhaustive, though not for a moment tedious. The friendship of the two men throws an illuminating torch light on Murch’s shadowy profession. The editor should be thrilled to have his genius commemorated in this way…. The probing thoughtfulness Murch displays in his conversations with Ondaatje reveal a preoccupation not just with theory, but with the prospect of a system of notation that might provide a common language to a cinematic profession that is still, essentially, an infant one…. fascinating.” -- The National Post

“It’s not often that a quick read provides so much insight.” -- The Ottawa Citizen

“It is the movie book of the season, in fact, the movie book for every season…. engrossing … What the book sparks, aside from rarely probed thoughts about editing, is a desire to see again the movies Murch has edited and to do this at home hand in hand with reading it.” -- The Toronto Star

“The Conversations is delightful mainly for Ondaatje’s palpable pleasure, the novelist’s pleasure for eccentric characters discovered in emblematic moments. Murch … is certainly eccentric…. The Conversations faithfully represents Ondaatje’s reverance for a man normally beyond public attention.” -- The Georgia Straight

“There’s much in store here for film fans…. many fascinating revelations about film as art.” -- Star Phoenix (Saskatoon)

Michael Ondaatje is the author of four previous novels, a memoir, and eleven books of poetry. His most recent novel, Anil’s Ghost, won the Governor General’s Award, the Giller Prize, the Prix Medicis, and the Irish Times Literature Prize. Born in Sri Lanka, he came to Canada in 1963 and apart from his books has made two documentary films. He lives in Toronto.
Loading...
or support indie stores by buying on