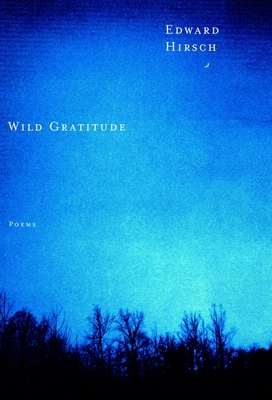 Winner of the National Book Critics Circle Award in Poetry, 1986


“This is a lovely and moving collection, and it has not only the courage of its strong emotions, but the language and form that makes and keeps them clear and true.”
—Anthony Hecht

“Hirsch remains a poet of celebration, but the sorrows of the world are here too, in equal measure. The language is, throughout, simple, sensuous, and direct. We can be grateful for this book and this poet.”
—Jay Parini

“I have known the poetry of Edward Hirsch for some time, and have greatly admired it. But I even more greatly admire his Wild Gratitude as a general collection, and I am convinced that the best poems here are unsurpassed in our time.”
—Robert Penn Warren

Edward Hirsch has published five previous books of poems: For the Sleepwalkers (1981), Wild Gratitude (1986), which won the National Book Critics Circle Award, The Night Parade (1989), Earthly Measures (1994), and On Love(1998). He has also written three prose books, including How to Read a Poem and Fall in Love with Poetry (1999), a national best-seller, and The Demon and the Angel: Searching for the Source of Artistic Inspiration (2002). A frequent contributor to the leading magazines and periodicals, including The New Yorker, DoubleTake, and American Poetry Review, he also writes the Poet's Choice column for the Washington Post Book World. He has received the Prix de Rome, a Guggenheim Fellowship, an American Academy of Arts and Letters Award for Literature, and a MacArthur Fellowship. A professor in the Creative Writing Program at the University of Houston for seventeen years, he is now President of the John Simon Guggenheim Memorial Foundation.
Loading...
or support indie stores by buying on
(This book is on backorder)