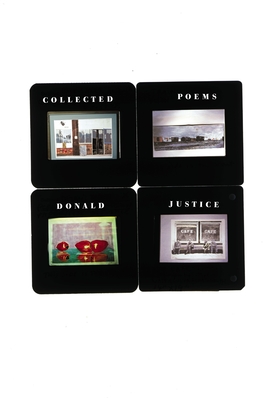 This celebratory volume gives us the entire career of Donald Justice between two covers, including a rich handful of poems written since New and Selected Poems was published in 1995. Winner of the Pulitzer Prize, Justice has been hailed by his contemporary Anthony Hecht as “the supreme heir of Wallace Stevens.” In poems that embrace the past, its terrors and reconciliations, Justice has become our poet of living memory. The classic American melancholy in his titles calls forth the tenor of our collective passages: “Bus Stop,” “Men at Forty,” “Dance Lessons of the Thirties,” “The Small White Churches of the Small White Towns.” This master of classical form has found in the American scene, and in the American tongue, all those virtues of our literature and landscape sought by Emerson and Henry James. For half a century he has endeavored, with painterly vividness and plainspoken elegance, to make those local views part of the literary heritage from which he has so often taken solace, and inspiration.

The afternoons of going home from school
Past the young fruit trees and the winter flowers.
The schoolyard cries fading behind you then,
And small boys running to catch up, as though
It were an honor somehow to be near—
All is forgiven now, even the dogs,
Who, straining at their tethers, used to bark,
Not from anger but some secret joy.

Donald Justice was born in Miami, Florida, in 1925. He was the author of numerous books and the recipient of many grants and prizes, including the Pulitzer Prize for his Selected Poems (1979). He taught at several universities, chiefly the University of Iowa and the University of Florida. He lived with his wife in Iowa City until his death in August of 2004.
Loading...
or
Not Currently Available for Direct Purchase