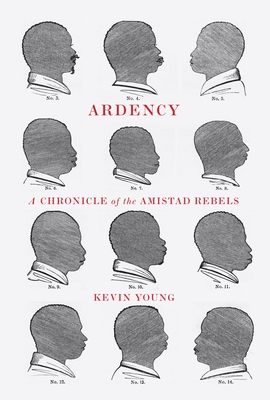 A Chronicle of the Amistad Rebels

Now in paperback, a haunting chorus of voices that tells the story of the captivity, education, language, hopes, dreams, and fight for freedom, of the African Americans abducted in the Amistad rebellion.

Based on the 1840 mutiny on board the slave ship Amistad, Ardency begins with "Buzzard," a sequence of poems told in the voice of the interpreter for the captive rebels, who were jailed in New Haven. In "Correspondence," we encounter the remarkable letters to John Quincy Adams and others that the captives wrote from jail. The book culminates in "Witness," a libretto chanted by Cinque, the rebel leader, who yearns for his family and freedom while eloquently evoking the Amistads' conversion and life in America. As Young conjures this array of characters, interweaving the liberation cry of Negro spirituals and the indoctrinating wordplay of American primers, he delivers his signature songlike immediacy at the service of an epic built on the ironies, violence, and virtues of American history.

KEVIN YOUNG is the author of six previous collections of poetry and the editor of Library of America's John Berryman: Selected Poems, the Everyman's Library Pocket Poets anthologies Blue Poems and Jazz Poems, and Giant Steps: The New Generation of African American Writers. His book Jelly Roll was a finalist for the National Book Award and the Los Angeles Times Book Prize and won the Paterson Poetry Prize, and For the Confederate Dead he won the 2007 Quill Award for poetry. He is the recipient of a Guggenheim Fellowship, and is currently the Atticus Haygood Professor of English and Creative Writing and curator of the Raymond Danowski Poetry Library at Emory University in Atlanta.
Loading...
or support indie stores by buying on