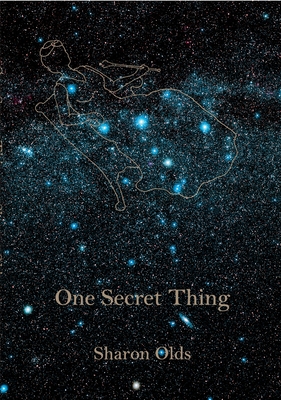 Sharon Olds completes her cycle of family poems in a book at once intense and harmonic, playful with language, and rich with a new self-awareness and sense of irony.

The opening poem, with its sequence of fearsome images of war, serves as a prelude to poems of home in which humor, anger, and compassion sing together with lyric energy—sometimes comic, sometimes filled with a kind of unblinking forgiveness. These songs of joy and danger—public and private—illuminate one another. As the book unfolds, the portrait of the mother goes through a moving revisioning, leading us to a final series of elegies of hard-won mourning. One Secret Thing is charged throughout with Sharon Olds’s characteristic passion, imagination, and poetic power.

The doctor on the phone was young, maybe on his
first rotation in the emergency room.
On the ancient boarding-school radio,
in the attic hall, the announcer had given my
boyfriend’s name as one of two
brought to the hospital after the sunrise
service, the egg-hunt, the crash—one of them
critical, one of them dead. I was looking at the
stairwell banisters, at their lathing,
the necks and knobs like joints and bones,
the varnish here thicker here thinner—I had said
Which one of them died, and now the world was
an ant’s world: the huge crumb of each
second thrown, somehow, up onto
my back, and the young, tired voice
said my fresh love’s name.

Sharon Olds was born in San Francisco. Her poetry has been chosen as the Lamont Poetry Selection and won the National Book Critics Circle Award. She lives in New York City.
Loading...
or support indie stores by buying on
(This book is on backorder)