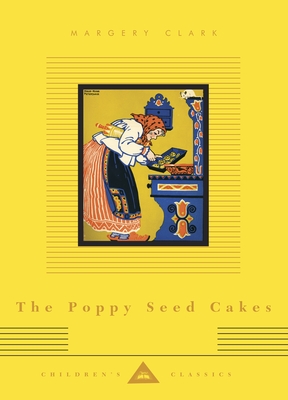 The Poppy Seed Cakes is a beloved children's classic first published in 1924: eight charming and humorous linked stories about little Andrewshek and his Auntie Katushka, with colorful woodcuts by Caldecott Award-winning illustrators Maud and Miska Petersham.

Auntie Katushka has just come from the Old Country, bringing poppy seeds to make cakes for a mischief-prone four-year-old boy named Andrewshek. A little neighbor girl named Erminka, who wears red boots that are too big for her, joins Andrewshek for a series of adventures with talking animals including a greedy goose who steals the cakes; a naughty white goat who hides on the roof; and a kitten, a dog, and two chickens who are determined to crash the children's tea party. There is art on every page, featuring mischievous animals and gooseberry tarts, colorful shawls and Russian dolls, and cheerful Auntie Katushka in her kerchiefed and aproned splendor.

Margery Clark was a pseudonym for Margery Closey Quigley (born in 1886) and Mary E. Clark, two librarians who coauthored children's books. Their best-known work is The Poppy Seed Cakes (1924). Quigley's other works include Portrait of a Library (1936), which was adapted into a film. She died in 1968.

ABOUT THE ILLUSTRATORS:  Maud (1889-1971) and Miska (1888-1960) Petersham were a prolific illustrating husband-and-wife team who are most famous for writing and illustrating The Rooster Crows, a book of American songs, rhymes, and games in the tradition of Mother Goose, which won the 1946 Caldecott Medal. Miska was born in Hungary and Maud (née Fuller) was born in New York.
Loading...
or
Not Currently Available for Direct Purchase