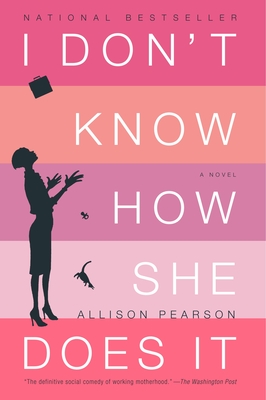 I Don't Know How She Does It

Praise For I Don't Know How She Does It: The Life of Kate Reddy, Working Mother…

“The book every working woman is likely to devour. . . . A hysterical look—in both the laughing and crying senses of the word—at the life of Supermom.” —The New York Times

“Perfectly captures the driven days and frequently sleep-deprived nights of that modern mammal, the working mother . . . with acute humor, piercing insight and more than a touch of tenderness.” —New York Daily News

Allison Pearson, an award-winning journalist and author, is a staff writer for the London Daily Telegraph. Her first novel, I Don’t Know How She Does It, became an international bestseller and was translated into thirty-two languages. It was a major motion picture, adapted by Aline Brosh McKenna and starred Sarah Jessica Parker. Her most recent novel, I Think I Love You, is set to become a stage musical. She is a patron of Camfed, a charity that supports the education of more than a million African girls (www.camfed.org). She lives in London with her husband, the New Yorker writer Anthony Lane, and their two children.
Loading...
or
Not Currently Available for Direct Purchase