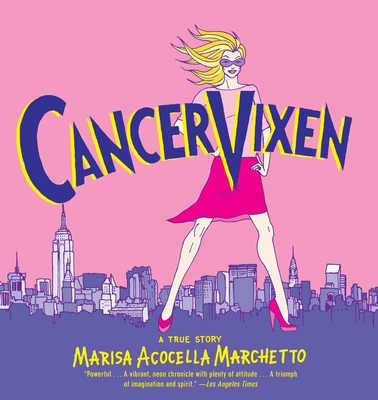 The groundbreaking graphic memoir that inspires breast cancer patients to fight back—and do so with style.

“What happens when a shoe-crazy, lipstick-obsessed, wine-swilling, pasta-slurping, fashion-fanatic, about-to-get-married big-city girl cartoonist with a fabulous life finds . . . a lump in her breast?” That’s the question that sets this powerful, funny, and poignant graphic memoir in motion. In vivid color and with a taboo-breaking sense of humor, Marisa Acocella Marchetto tells the story of her eleven-month, ultimately triumphant bout with breast cancer—from diagnosis to cure, and every challenging step in between.

•One of Time’s top ten graphic novels of the year
•Slate.com’s medical book of the year
•One of the Wall Street Journal’s five best books on living with illness
•Finalist, Books for a Better Life
•Finalist, National Cartoonists Society Graphic Novel of the Year

“Powerful . . . A vibrant, neon chronicle with plenty of atti­tude . . . A triumph of imagination and spirit.”
—Los Angeles Times

“Irresistibly authentic . . . These words and pictures convey humility and humanity with witty grace and heartfelt power.”
—The Miami Herald

MARISA ACOCELLA MARCHETTO is a cartoonist for The New Yorker and Glamour. Her work has also appeared in The New York Times and Modern Bride, among other publications. She is the founder and chair of the Cancer Vixen Fund at St. Vincent’s Hospital in New York City, where she lives.
Loading...
or support indie stores by buying on