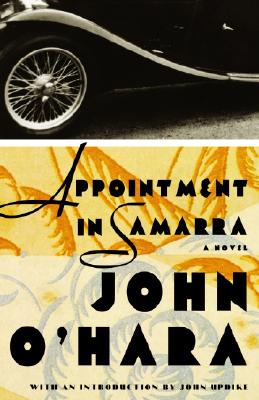 A twentieth-century classic, Appointment in Samarra is the first and most widely read book by the writer Fran Leibowitz called “the real F. Scott Fitzgerald.”

In December 1930, just before Christmas, the Gibbsville social circuit is electrified with parties and dances, where the music plays late into the night and the liquor flows freely. At the center of the social elite stand Julian and Caroline English—the envy of friends and strangers alike. But in one rash moment born inside a highball glass, Julian breaks with polite society and begins a rapid descent toward self-destruction. Appointment in Samarra brilliantly captures the personal politics and easy bitterness of small-town life. It is John O’Hara’s crowning achievement, and a lasting testament to the keen social intelligence of a major American novelist.


Praise For Appointment in Samarra…


“[O'Hara] is the only American writer to whom America presents itself as a social scene in the way it once presented itself to Henry James, or France to Proust.” —Lionel Trilling, The New York Times

“If you want to read a book by a man who knows exactly what he is writing about and has written it marvelously well, read Appointment in Samarra.” —Ernest Hemingway

John O'Hara (1905--70) received instant acclaim for Appointment in Samarra," "his first novel, and quickly came to be regarded as one of the most prominent writers in America. He won the National Book Award for his novel Ten North Frederick and had more stories published in "The New Yorker" than anyone in the history of the magazine. His fourteen novels include A Rage to Live, Pal Joey, Butterfield 8," " and From the Terrace," " and his more than four hundred short stories have been collected in twelve volumes.
Loading...
or
Not Currently Available for Direct Purchase