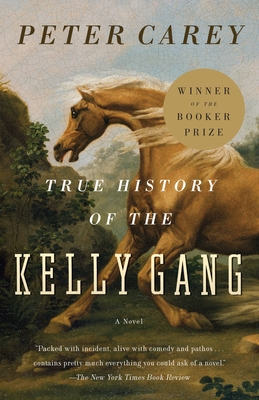 True History of the Kelly Gang

“I lost my own father at 12 yr. of age and know what it is to be raised on lies and silences my dear daughter you are presently too young to understand a word I write but this history is for you and will contain no single lie may I burn in Hell if I speak false.”

In True History of the Kelly Gang, the legendary Ned Kelly speaks for himself, scribbling his narrative on errant scraps of paper in semiliterate but magically descriptive prose as he flees from the police. To his pursuers, Kelly is nothing but a monstrous criminal, a thief and a murderer. To his own people, the lowly class of ordinary Australians, the bushranger is a hero, defying the authority of the English to direct their lives. Indentured by his bootlegger mother to a famous horse thief (who was also her lover), Ned saw his first prison cell at 15 and by the age of 26 had become the most wanted man in the wild colony of Victoria, taking over whole towns and defying the law until he was finally captured and hanged. Here is a classic outlaw tale, made alive by the skill of a great novelist.

Praise For True History of the Kelly Gang: A Novel (Vintage International)…

“Vastly entertaining…. Triumphantly eclectic, as if Huck Finn and Shakespeare had joined forces to prettify the legend of Jesse James.”—The New York Times

“The ingenuity, empathy, and poetic ear that the novelist brings to his feat of imposture cannot be rated too high.”—John Updike, The New Yorker

“Carey succeeds in creating an account that not only feels authentic but also passes as a serious novel and solid, old-fashioned ‘entertainment.’ A big, meaty novel, blending Dickens and Cormac McCarthy with a distinctly Australian strain of melancholy.”—San Francisco Chronicle

“Carey’s pen writes with an ink that is two parts archaic and one part modern and colors a prose that rocks and cajoles the reader into a certainty that Ned Kelly is fit company not only for Jack Palance and Clint Eastwood but for Thomas Jefferson and perhaps even a bodhisattva.”—Los Angeles Times

“The power and charm of [this book] arise not from fidelity to facts but rather from the voice Carey invents for Ned Kelly….”—Time

“So adroit that you never doubt it’s Kelly’s own words you’re reading in the headlong, action-packed story.”—Newsweek

“This novel is worth our best attention.”—The Washington Post Book World

“An avalanche of a novel…. Cary has raised a national legend to the level of an international myth.”—Christian Science Monitor

“Packed with incident, alive with comedy and pathos . . . contains pretty much everything you could ask of a novel.” —The New York Times Book Review