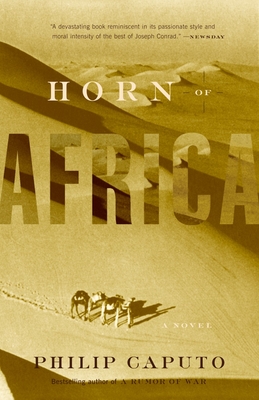 When Vietnam veteran and foreign correspondent Charlie Gage is recruited by the shadowy Thomas Colfax to assist with something called Operation Atropos, he has no idea he is about to be enlisted for guerilla warfare in northeast Africa. Once he realizes he’s a mercenary, however, he is not at all concerned. Ever since his young secretary was killed by a grenade at their bureau office in Beirut a couple of years before, he has lost all volition. Which is why he so readily capitulates not only to Colfax, but also, and more dangerously so, to every command of Jeremy Nordstrand, the mystical megalomaniac determined to achieve greatness on their seemingly suicidal mission. Set in the forsaken yet exotic deserts of Ethiopia, Horn of Africa is a vividly detailed and masterfully plotted novel chronicling a broken man’s struggle for salvation and inner freedom in the midst of a broken nation’s fight for stability and peace.

Praise For Horn of Africa: A Novel (Vintage Contemporaries)…

“Reminiscent in its passionate style and moral intensity of the best of Joseph Conrad.”–Newsday

“An extraordinarily powerful novelist who works in one of the grand traditions of literature: the fiction of nightmare against the background of war and espionage.”–The Dallas Morning News