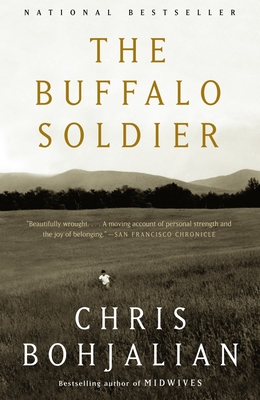 NATIONAL BESTSELLER • With his trademark emotional heft and storytelling skill, the bestselling author of The Flight Attendant presents a resonant novel about the unconventional family that forms after Terry and Laura Sheldon, a Vermont storm trooper and his wife grieving the loss of their twin daughters, take in a foster child.

His name is Alfred; he is ten years old and African American. And he has passed through so many indifferent families that he can’t believe that his new one will last.

In the ensuing months Terry and Laura will struggle to emerge from their shell of grief only to face an unexpected threat to their marriage; Terry’s involvement with another woman. Meanwhile, Alfred cautiously enters the family circle, and befriends an elderly neighbor who inspires him with the story of the buffalo soldiers, the black cavalrymen of the old West. Out of the entwining and unfolding of their lives, The Buffalo Soldier creates a suspenseful, moving portrait of a family, infused by Bohjalian’s moral complexity and narrative assurance.

Praise For The Buffalo Soldier: A Novel (Vintage Contemporaries)…

“In The Buffalo Soldier, Bohjalian proves once again that he's a master novelist.” –The Boston Globe

“Bohjalian plunges [his characters] into a dramatic situation so powerful that even their quiet voices cannot fail to be heard. . . .The Buffalo Soldier is imbued with hope and the possibility for redemption.” –The Washington Post

“Beautifully wrought. . . . A moving account of personal strength and the joy of belonging.” –San Francisco Chronicle

“If it's captivating literature you're after, The Buffalo Soldier earns a solid A.” –Entertainment Weekly

CHRIS BOHJALIAN is the #1 New York Times bestselling author of twenty-three books, including Hour of the Witch, The Red Lotus, Midwives, and The Flight Attendant, which has been made into an HBO Max limited series starring Kaley Cuoco. His other books include The Guest Room; Close Your Eyes, Hold Hands; The Sandcastle Girls; Skeletons at the Feast; and The Double Bind. His novels Secrets of Eden, Midwives, and Past the Bleachers were made into movies, and his work has been translated into more than thirty-five languages. He is also a playwright (Wingspan and Midwives). He lives in Vermont and can be found at chrisbohjalian.com or on Facebook, Instagram, Twitter, Litsy, and Goodreads, @chrisbohjalian
Loading...
or support indie stores by buying on
(This book is on backorder)