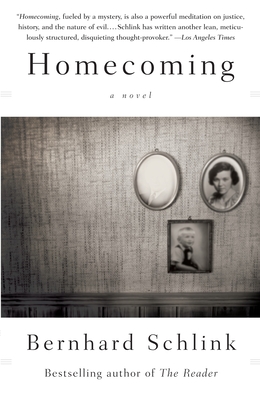 Growing up with his mother in Germany, Peter Debauer knows little about his father, an apparent victim of the Second World War. But when he stumbles upon a few pages from a long-lost novel, Peter embarks on a quest that leads him across Europe to the United States, chasing fragments of a story within a story and a master of disguises who may or may not exist. Homecoming is a tale of fathers and sons, men and women, war and peace. It reveals the humanity that survives the trauma of war and the ongoing possibility for redemption.

“Homecoming, fueled by a mystery, is also a powerful meditation on justice, history, and the nature of evil. . . . Schlink has written another lean, meticulously structured, disquieting thought-provoker.” —Los Angeles Times “A beguilingly oblique novel. . . . Despite its intricate, maze-like progression, Homecoming has surprising narrative thrust.” —The Economist“Sensitive and disturbing. . . . The reader's mind opens to the story like a plant unfurling its leaves to the sun.” —The New York Times Book Review"Plot twists and surprises and sometimes outright lies complicate the book's multilayered homecoming theme. . . . Schlink has woven a homecoming tale as fascinating as Homer's Odyssey, its inspiration." —Seattle Times

Bernhard Schlink was born in Germany. He is the author of the internationally best-selling novel The Reader, which was an Oprah's Book Club selection. He lives in Berlin and New York.
Loading...
or
Not Currently Available for Direct Purchase