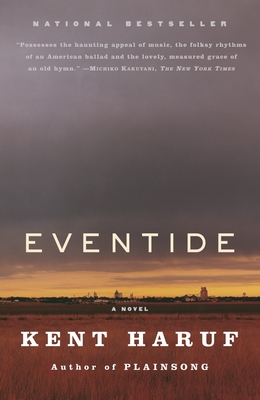 One of The Best Books of The Year: Chicago Tribune, Entertainment Weekly, The Plain Dealer, and Rocky Mountain News

Kent Haruf, award-winning, bestselling author of Plainsong returns to the high-plains town of Holt, Colorado, with a novel of masterful authority. The aging McPheron brothers are learning to live without Victoria Roubideaux, the single mother they took in and who has now left their ranch to start college. A lonely young boy stoically cares for his grandfather while a disabled couple tries to protect their a violent relative. As these lives unfold and intersect, Eventide unveils the immemorial truths about human beings: their fragility and resilience, their selfishness and goodness, and their ability to find family in one another.

“Possesses the haunting appeal of music, the folksy rhythms of an American ballad and the lovely, measured grace of an old hymn.” –Michiko Kakutani, The New York Times

"A kind book in a cruel world. . . [with] honest impulses, real people and the occasional workings of grace." –Christopher Tilghman, The Washington Post

“An extraordinary vision. . . . Who in America can still write like this? Who else has such confidence and such humility?" –Ron Charles, The Christian Science Monitor

“Stunning. . . . The dry, cold air of Colorado's high plains seems to intensify the light Kent Haruf shines on every character in his masterful novel. . . . A book of hope, hope as plain and hard-won as Haruf's keenly styled prose.” –Mark Doty, O, The Oprah Magazine

"Writing in a style reminiscent of Hemingway, Haruf has a pitch-perfect ear for dialogue. . . . Eventide is a spare, delicate and beautiful book. Haruf has created another poignant meditation on the true meaning of family." –The Oregonian

“A clear distillation of the writer's craft, [Eventide is] a book that grabs you by the heart on the first page, refusing to release its grasp until the last." –The Denver Post

"Highly charged and compassionate. . . . Every action in Holt casts a long shadow, and the gist of Haruf's story is what happens when those shadows touch." –The New Yorker

"Masterful. . . . A full and satisfying novel . . . [that] might be even more emotionally powerful than its predecessor. . . . [Haruf] rewards the reader's willingness to explore quotidian life with the occasional burst of heart-pounding drama, [and] one scene of romantic discovery, understated and painterly, is enough to weaken the knees of any cynic." –The Plain Dealer

"Haruf's laconic style-- with nouns as strong and upright as fenceposts, the verbs as clean and sharp as razor wire-- [creates] a richly symphonic effect. . . . In creating a place whose people are tethered to each other by history and emotion as much as place, Haruf's work is now competing with Faulkner's Mississippi, Sherwood Anderson's Midwest, and Wallace Stegner's northern California." –Chicago Sun-Times

"Like the lives he chronicles, Haruf's prose moves relentlessly forward, catching in his images the fierceness and sweetness of experience." –Minneapolis Star Tribune

"There's a decency that shines in the very accuracy with which [Haruf] describes the ordinary--the ordinary for Holt, that is, though it has become exotic to the rest of us. Scene after scene . . . flows by us as clear as spring water, proof that truth, like virtue, is its own reward." –Los Angeles Times Book Review

"Haruf is a master of evocative description, [and his] lyrical style, which has been compared to that of Hemingway and Chekhov . . . quickly infects the reader with its own peculiar rhythms. . . . Most important, there is Haruf's spirit, which suggests that people unrelated by blood can and must form families, that a simple act of goodwill can occur even when it seems impossible." –St. Louis Post-Dispatch

"Hoyt is a villain of Dickensian proportion, and the novel lights up with smart-alecky viciousness every time he steps onto the page." –San Francisco Chronicle

“Eventide is a lovely novel, all the more for its uncompromising realism, its eschewing of the magical palliative of happy endings, its recognition that decency carries its own unique rewards." –The Baltimore Sun

"The writer's heartfelt attention to his characters' wants and needs, especially their troubled inner lives, merits a close look from anyone who reads books to gain insight into that incalculable blend of tragedy and grace that inevitably marks every human life." –Orlando Sentinel

"Kent Haruf returns to small-town Colorado with another pitch-perfect novel. . . . Haruf has once again demonstrated that he can push a tale featuring our Western landscape beyond romanticized cowboy myth into distilled reality." –Rocky Mountain News

"Haruf's characters and his town loom as large as any in contemporary American fiction. I hope Haruf returns to Holt for at least one more book." –Jim Grinnell, The Bloomsbury Review

“A permanent addition to the literary map of this country." –Milwaukee Journal-Star

Kent Haruf is the author of five previous novels (and, with the photographer Peter Brown, West of Last Chance). His honors include a Whiting Foundation Writers’ Award, the Mountains & Plains Booksellers Award, the Wallace Stegner Award, and a special citation from the PEN/Hemingway Foundation; he was also a finalist for the National Book Award, the Los Angeles Times Book Prize, and the New Yorker Book Award. He died in November 2014, at the age of seventy-one.