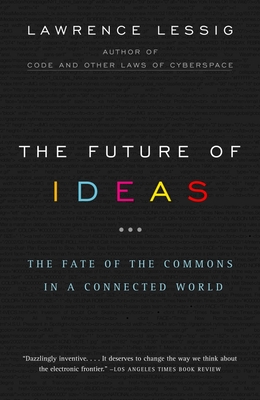 The Future of Ideas

The Fate of the Commons in a Connected World

The Internet revolution has come. Some say it has gone. In The Future of Ideas, Lawrence Lessig explains how the revolution has produced a counterrevolution of potentially devastating power and effect. Creativity once flourished because the Net protected a commons on which widest range of innovators could experiment. But now, manipulating the law for their own purposes, corporations have established themselves as virtual gatekeepers of the Net while Congress, in the pockets of media magnates, has rewritten copyright and patent laws to stifle creativity and progress.

Lessig weaves the history of technology and its relevant laws to make a lucid and accessible case to protect the sanctity of intellectual freedom. He shows how the door to a future of ideas is being shut just as technology is creating extraordinary possibilities that have implications for all of us. Vital, eloquent, judicious and forthright, The Future of Ideas is a call to arms that we can ill afford to ignore.

Praise For The Future of Ideas: The Fate of the Commons in a Connected World…

“Dazzlingly inventive . . . It deserves to change the way we think about the electronic frontier.” —Los Angeles Times Book Review

“A manifesto that shakes you up, making you aware of how much is lost when a culture turns ‘ideas’ into ‘intellectual property.’” —The New York Times Book Review

“A breath of fresh air in a crowded field . . . This book is a public service.” —The New York Times

“Lessig is one of the brightest minds grappling with the consequences of the digital world today, as deft and original with technical intricacies as he is with broad legal theory. . . . The Future of Ideas succeeds marvelously.” —The Nation

“Lessig’s book will serve as an excellent guide.” —The Washington Post Book World

Lawrence Lessig is a professor of law at the Stanford Law School. Previously Berkman Professor of Law at Harvard Law School from 1997 to 2000 and professor at the University of Chicago Law School from 1991 to 1997, he is a graduate of the University of Pennsylvania, Trinity College, Cambridge, and Yale Law School. He clerked for Judge Richard Posner on the Seventh Circuit Court of Appeals and Justice Antonin Scalia on the United States Supreme Court. He is a monthly columnist for The Industry Standard, a board member of the Red Hat Center for Open Source, and the author of Code and Other Laws of Cyberspace.
Loading...
or
Not Currently Available for Direct Purchase