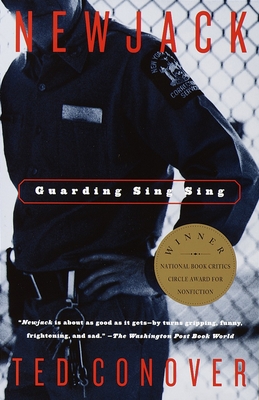 WINNER OF THE NATIONAL BOOK CRITICS CIRCLE AWARD FOR NONFICTION • An acclaimed journalist sets a new standard for bold, in-depth reporting in this first-hand account of life inside the penal system at Sing Sing.

“Newjack is about as good as it gets—by turns gripping, funny, frightening, and sad.” —The Washington Post Book World

When Ted Conover’s request to shadow a recruit at the New York State Corrections Officer Academy was denied, he decided to apply for a job as a prison officer himself. The result is an unprecedented work of eyewitness journalism: the account of Conover's year-long passage into storied Sing Sing prison as a rookie guard, or "newjack."

As he struggles to become a good officer, Conover angers inmates, dodges blows, and attempts, in the face of overwhelming odds, to balance decency with toughness. Through his insights into the harsh culture of prison, the grueling and demeaning working conditions of the officers, and the unexpected ways the job encroaches on his own family life, we begin to see how our burgeoning prison system brutalizes everyone connected with it. An intimate portrait of a world few readers have ever experienced, Newjack is a haunting journey into a dark undercurrent of American life.

“An amazing book…. The stories are spellbinding and the telling is clear and cold.”  —The Washington Post Book World

“[Conover] has made us fully part of his experience…. It is hard to imagine any journalist doing this more daringly or effectively.”  —The New York Times

“Newjack is a graphic and troubling window into society’s scrapheap. Conover is to be commended for having the chops to venture where few others would dare go.... An important cautionary tale.”  —Los Angeles Times Book Review

“Newjack tells the straight skinny on a guard’ s life inside prison without being overly judgmental or cloyingly sentimental. It’ s experimental journalism at its best.”  —The Denver Post

“A devastating chronicle of the toll prison takes on the prisoners and the keepers of the keys.”–Minneapolis Star Tribune

“An incisive and indelible look at the life of a corrections officer and the dark life of the penal system.”–The Dallas Morning News

TED CONOVER is the author of several books including Newjack: Guarding Sing Sing(winner of the National Book Critics Circle Award and a finalist for the Pulitzer Prize) and Rolling Nowhere: Riding the Rails with America’s Hoboes. His writing has appeared in The New York Times Magazine, The Atlantic Monthly, The New Yorker,and National Geographic. The recipient of a Guggenheim Fellowship, he is Distinguished Writer-in-Residence in the Arthur L. Carter Journalism Institute at New York University. He lives in New York City.
Loading...
or
Not Currently Available for Direct Purchase