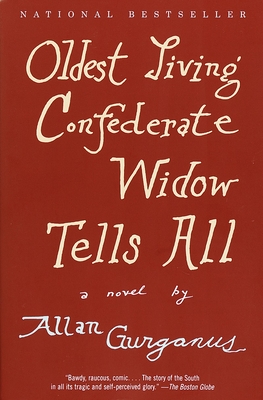 Allan Gurganus's Oldest Living Confederate Widow Tells All became an instant classic upon its publication. Critics and readers alike fell in love with the voice of ninety-nine-year-old Confederate widow Lucy Marsden, one of the most entertaining and loquacious heroines in American literature.

Lucy married at the turn of the twentieth century, when she was fifteen and her husband was fifty. If Colonel William Marsden was a veteran of the "War for Southern Independence," Lucy became a "veteran of the veteran" with a unique perspective on Southern history and Southern manhood. Lucy’s story encompasses everything from the tragic death of a Confederate boy soldier to the feisty narrator's daily battles in the Home--complete with visits from a mohawk-coiffed candy striper. Oldest Living Confederate Widow Tells All is a marvel of narrative showmanship and proof that brilliant, emotional storytelling remains at the heart of great fiction.

"Bawdy, raucous, comic... The story of the South in all its tragic and self-perceived glory."
--The Boston Globe

"A big book in every way, one hell of an American novel."
--San Francisco Chronicle

Allan Gurganus is the winner of the Los Angeles Times Book Prize, the Southern Book Prize, the Sue Kaufman Prize from the American Academy of Arts and Letters, and a finalist of the PEN/Faulkner Award. Adaptations of his fiction have earned four Emmys. He lives in a small town in North Carolina.
Loading...
or support indie stores by buying on