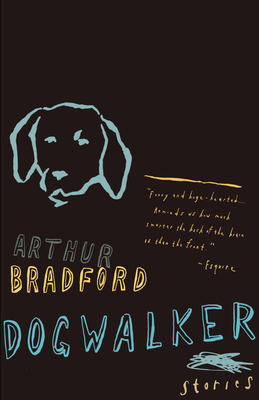 Tender and satiric, hilarious and humane, Dogwalker plunks readers down in a land of misfits and the circumstantially strange–where one young man buys drugs from a dealer who locks his customers in a closet, while another lands a cat-faced circus freak for a roommate, and yet another must choose between his pregnant wife and the ten-pound slug he’s convinced will bring him a fortune. And throughout these stories moves a divinely inspired collection of dogs: three-legged, no-legged, dogs that sing, that talk, and that give birth to humans. Brilliant, perplexing, and moving, this is a daring debut that strolls along society’s fringes and unearths strange beauty among its misfits

“Funny and huge-hearted. . . . Reminds us how much smarter the back of the brain is than the front.” –Esquire

“The most outlandish and energetic writer I can think of.” –David Sedaris

“[Bradford’s] desire to talk about the heart in a way that’s not navel-gazing, but rather earnest and real, burns through. Dogwalker soars. . . .” –San Francisco Chronicle

“Anyone who’s ever wondered at the weirdness of the world will be grateful for these offerings.” —Entertainment Weekly

Arthur Bradford's fiction has appeared in McSweeney's, Esquire, and The O. Henry Awards. He is also the creator and director of How's Your News?, a traveling news show produced by the denizens of Camp Jabberwocky, the oldest camp for adults with disabilities in the country.
Loading...
or
Not Currently Available for Direct Purchase