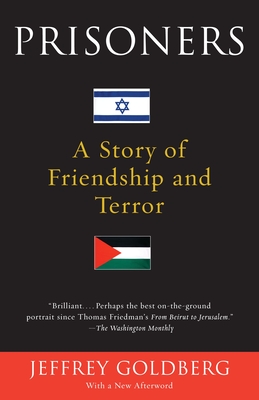 A Story of Friendship and Terror

During the first Palestinian uprising in 1990, Jeffrey Goldberg – an American Jew – served as a guard at the largest prison camp in Israel. One of his prisoners was Rafiq, a rising leader in the PLO. Overcoming their fears and prejudices, the two men began a dialogue that, over more than a decade, grew into a remarkable friendship. Now an award-winning journalist, Goldberg describes their relationship and their confrontations over religious, cultural, and political differences; through these discussions, he attempts to make sense of the conflicts in this embattled region, revealing the truths that lie buried within the animosities of the Middle East.

Jeffrey Goldberg is the Washington correspondent of The New Yorker; he was Middle East correspondent from 2000-2005. Previously he covered the Middle East for The New York Times Magazine. He has also written for The Forward, The Jerusalem Post, and The Washington Post. His awards include a National Magazine Award in Reporting, an Overseas Press Club Award for Human Rights Reporting, and selection as International Investigative Journalist of the Year by the International Consortium of Investigative Journalists. He served as a Public Policy Scholar at the Woodrow Wilson International Center for Scholars in Washington. He is married and has three children.

Praise For Prisoners: A Story of Friendship and Terror…

“Revelatory.” —The New York Times “Fascinating, hilarious, terrifying. . . . The journey is riveting and well-wrought in a book that makes clear the confusing mess that is the Palestinian-Israeli conflict.”—The Chicago Tribune“Sensitive, forthright and perceptive . . . . A forceful reminder of how rewarding, and how difficult, discourse between Israelis and Palestinians can be.”—The Washington Post“Sharply observed and beautifully written. . . . A bracingly clear-eyed, deeply emotional and often humorous account. . . . Prisoners offers no easy answers but manages to inspire the rarest of commodities in the Middle East: hope.” —Los Angeles Times
or
Not Currently Available for Direct Purchase
Copyright © 2020 American Booksellers Association