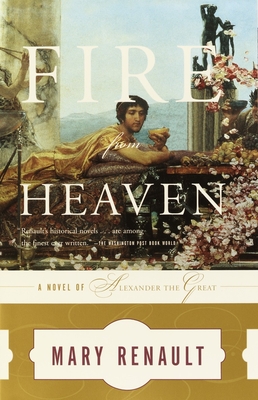 Alexander’s beauty, strength, and defiance were apparent from birth, but his boyhood honed those gifts into the makings of a king. His mother, Olympias, and his father, King Philip of Macedon, fought each other for their son’s loyalty, teaching Alexander politics and vengeance from the cradle. His love for the youth Hephaistion taught him trust, while Aristotle’s tutoring provoked his mind and Homer’s Iliad fueled his aspirations. Killing his first man in battle at the age of twelve, he became regent at sixteen and commander of Macedon’s cavalry at eighteen, so that by the time his father was murdered, Alexander’s skills had grown to match his fiery ambition.

Mary Renault was born in London and educated at Oxford. She then trained for three years as a nurse, and wrote her first published novel, Promise of Love. Her next three novels were written while serving in WWII. After the war, she settled in South Africa and traveled considerably in Africa and Greece. It was at this time that she began writing her brilliant historical reconstructions of ancient Greece, including The King Must Die, The Last of the Wine, and The Persian Boy. She died in Cape Town in 1983.

Praise For Fire from Heaven (The Alexander Trilogy #1)…

“Written with her usual vigor and imagination...Mary Renault has a great talent.” –The New York Times Book Review
or support indie stores by buying on
Copyright © 2020 American Booksellers Association