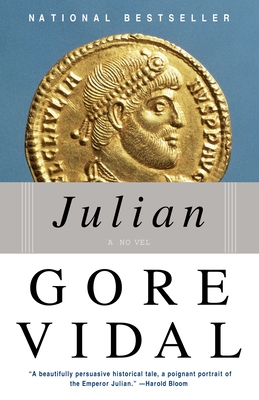 The remarkable bestseller about the fourth-century Roman emperor who famously tried to halt the spread of Christianity, Julian is widely regarded as one of Gore Vidal’s finest historical novels.

Julian the Apostate, nephew of Constantine the Great, was one of the brightest yet briefest lights in the history of the Roman Empire. A military genius on the level of Julius Caesar and Alexander the Great, a graceful and persuasive essayist, and a philosopher devoted to worshipping the gods of Hellenism, he became embroiled in a fierce intellectual war with Christianity that provoked his murder at the age of thirty-two, only four years into his brilliantly humane and compassionate reign. A marvelously imaginative and insightful novel of classical antiquity, Julian captures the religious and political ferment of a desperate age and restores with blazing wit and vigor the legacy of an impassioned ruler.

“Impressive. . . . To the formidable task which Vidal sets himself, he brings an easy and fluent gift for narrative; a theatrical sense of scene and dramatic occasion; and a revealing eye and ear for character delineation–to say nothing of wide reading.” –Newsweek

“Gore Vidal has the sharpest sense of what political power consists of, how it is achieved and what it does to a man. And at the same time he is funny, roaringly funny. . . . Julian is a brilliant beacon of light in the dim grey landscape of the historical novel.” –Louis Auchincloss

“A brilliant study of Julian’s era. . . . That rare historical novel which enjoys all the virtues of good history and good fiction.” –Washington Star

“No odder figure ever guided the destinies of the Roman Empire than the Emperor Julian Augustus. Here was a recluse and a scholar who became a great military leader, an ascetic who preached the life of the senses, a fatalist who believed he would remake the world. . . . He is endlessly fascinating.” –Time

Gore Vidal was born in 1925 at the United States Military Academy at West Point. His first novel, Williwaw, written when he was nineteen years old and serving in the Army, appeared in the spring of 1946. Since then he has written twenty-three novels, five plays, many screenplays, short stories, well over two hundred essays, and a memoir.
or support indie stores by buying on
(This book is on backorder)