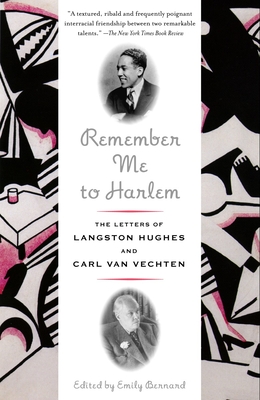 Remember Me to Harlem

The Letters of Langston Hughes and Carl Van Vechten

Langston Hughes is widely remembered as a celebrated star of the Harlem Renaissance -- a writer whose bluesy, lyrical poems and novels still have broad appeal. What's less well known about Hughes is that for much of his life he maintained a friendship with Carl Van Vechten, a flamboyant white critic, writer, and photographer whose ardent support of black artists was peerless.
Despite their differences — Van Vechten was forty-four to Hughes twenty-two when they met–Hughes’ and Van Vechten’s shared interest in black culture lead to a deeply-felt, if unconventional friendship that would span some forty years. Between them they knew everyone — from Zora Neale Hurston to Richard Wright, and their letters, lovingly and expertly collected here for the first time, are filled with gossip about the antics of the great and the forgotten, as well as with talk that ranged from race relations to blues lyrics to the nightspots of Harlem, which they both loved to prowl. It’s a correspondence that, as Emily Bernard notes in her introduction, provides “an unusual record of entertainment, politics, and culture as seen through the eyes of two fascinating and irreverent men.

Praise For Remember Me to Harlem: The Letters of Langston Hughes and Carl Van Vechten…

“Much of the history of race relations–and literary history–in America during the first half of the 20th century is represented here. . . . A magnificent contribution to our understanding of an important friendship.”–The Washington Post

“Remember Me to Harlem is not only a major contribution to our understanding of the Harlem Renaissance, it is also a delightful collection of gossipy correspondence between two of its leading–and most intriguing–characters.” — Henry Louis Gates, Jr.


“If you’re interested in the Harlem Renaissance, you can’t afford to miss this book.”–Vibe

“A remarkable work that reveals a complicated relationship between two important U.S. literary figures whose long friendship reached across the racial divide” –The Miami Herald