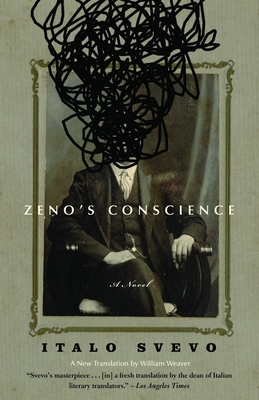 Long hailed as a seminal work of modernism in the tradition of Joyce and Kafka, and now available in a supple new English translation, Italo Svevo’s charming and splendidly idiosyncratic novel conducts readers deep into one hilariously hyperactive and endlessly self-deluding mind. The mind in question belongs to Zeno Cosini, a neurotic Italian businessman who is writing his confessions at the behest of his psychiatrist. Here are Zeno’s interminable attempts to quit smoking, his courtship of the beautiful yet unresponsive Ada, his unexpected–and unexpectedly happy–marriage to Ada’s homely sister Augusta, and his affair with a shrill-voiced aspiring singer. Relating these misadventures with wry wit and a perspicacity at once unblinking and compassionate, Zeno’s Conscience is a miracle of psychological realism.

“Svevo’s masterpiece . . . [in] a fresh translation by the dean of Italian literary translators.” –Los Angeles Times

“An excellent new rendering [of a] marvellous and original book.”–James Wood, London Review of Books

“A masterpiece, a novel overflowing with human truth in all its murkiness, laughter and terror, a book as striking and relevant today as when it was first published, and a book that is in every good way–its originality included–like life.” –Claire Messud, The New Republic

“An event in modern publishing. For the first time, I believe, in English, we get the true, dark music, the pewter tints, of Svevo’s great last novel. . . . [Svevo is] a master.” –Joan Acocella, The New Yorker

“One of the great comic novels of the twentieth century. . . . [Svevo is] perhaps the most significant Italian modernist novelist.” –The Times Literary Supplement

“A reason for celebration. . . . If you have never read Svevo, do so as soon as you can. He is beautiful and important.” –New Statesman

“One of the indispensable 20th-century novels. . . . A revolutionary book, and arguably (in fact, probably) the finest of all Italian novels.” –Kirkus Reviews

“No one has done more to make modern Italian literature available in English than William Weaver. . . . [His new translation is] scrupulously accurate.” –Anniston Star

Italo Svevo, whose real name was Ettore Schmitz, was born in Trieste in 1861. He was educated in Trieste and in a commercial school in Germany and returned to his birthplace to begin a business career that he pursued successfully until his death. He published three novels (at his own expense): Una vita (1892; English translation: A Life), Senilità (1898; English translation: Emilio’s Carnival; also translated under the title As a Man Grows Older), and La coscienza di Zeno (1923; English translation: Zeno’s Conscience; also translated under the title Confessions of Zeno). After his first two novels were ignored, Svevo considered giving up writing and devoting himself full-time to business. Aiming to improve his English, he fell under the tutelage of James Joyce, twenty years his junior. Svevo read early portions of Dubliners, and Joyce read Svevo’s two novels and encouraged him to take up writing again. When Svevo completed Zeno’s Conscience, Joyce arranged to have it published in France, where Svevo was dubbed “the Italian Proust.” He soon emerged from obscurity in Italy, and his rank as a major writer was already established when he died in a car accident in 1928.
Loading...
or
Not Currently Available for Direct Purchase