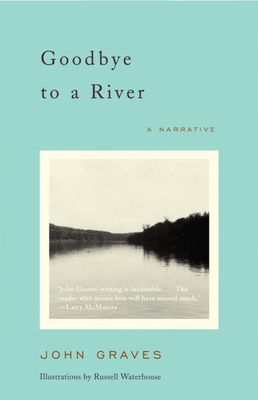 Goodbye to a River

In the 1950s, a series of dams was proposed along the Brazos River in north-central Texas. For John Graves, this project meant that if the stream’s regimen was thus changed, the beautiful and sometimes brutal surrounding countryside would also change, as would the lives of the people whose rugged ancestors had eked out an existence there. Graves therefore decided to visit that stretch of the river, which he had known intimately as a youth.

Goodbye to a River is his account of that farewell canoe voyage. As he braves rapids and fatigue and the fickle autumn weather, he muses upon old blood feuds of the region and violent skirmishes with native tribes, and retells wild stories of courage and cowardice and deceit that shaped both the river’s people and the land during frontier times and later. Nearly half a century after its initial publication, Goodbye to a River is a true American classic, a vivid narrative about an exciting journey and a powerful tribute to a vanishing way of life and its ever-changing natural environment.

Praise For Goodbye to a River: A Narrative (Vintage Departures)…

“John Graves’s writing is invaluable. . . . The reader who misses Graves will have missed much.” --Larry McMurtry

“As you read, you have the feeling that the whole colorful, brutal tapestry of the Lone Star State is being unrolled for you out of the biography of this one stream.” —The Atlantic Monthly

“Graves’ originality and flair turn this local scene and regional lore into an hoest and powerfully evocative picture of frontier life anywhere.” —The Chicago Sunday Tribune

“One of the most pleasing books I’ve ever read. I love the way it weaves together remote history, not so remote history, present events, and landscape.”—Elizabeth Marshall Thomas, author of The Hidden Life of Dogs

John Graves was born in Texas and educated at Rice University and Columbia University. He published a number of books, chiefly concerned with his home region, including Goodbye to a River, From a Limestone Ledge, Hard Scrabble, and Myself and Strangers. He died in 2013 in Glen Rose, Texas.
Loading...
or support indie stores by buying on