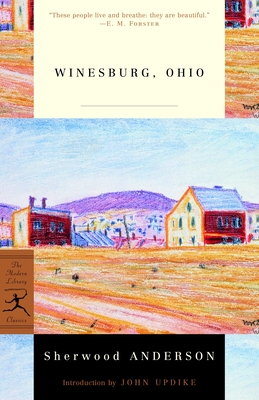 Before Raymond Carver, John Cheever, and Richard Ford, there was Sherwood Anderson, who, with Winesburg, Ohio, charted a new direction in American fiction--evoking with lyrical simplicity quiet moments of epiphany in the lives of ordinary men and women. In a bed, elevated so that he can peer out the window, an old writer contemplates the fluttering of his heart and considers, as if viewing a pageant, the inhabitants of a small midwestern town. Their stories are about loneliness and alienation, passion and virginity, wealth and poverty, thrift and profligacy, carelessness and abandon. "Nothing quite like it has ever been done in America," wrote H. L. Mencken. "It is so vivid, so full of insight, so shiningly life-like and glowing, that the book is lifted into a category all its own."

With Commentary by Sherwood Anderson, Rebecca West, and Hart Crane

"When he calls himself a 'poor scribbler' don't believe him. He is not a poor scribbler . . . he is a very great writer."--Ernest Hemingway

"Winesburg, Ohio, when it first appeared, kept me up a whole night in a steady crescendo of emotion."--Hart Crane

"As a rule, first books show more bravado than anything else, unless it be tediousness. But there is neither of these qualities in Winesburg, Ohio. . . . These people live and breathe: they are beautiful."--E. M. Forster

"Winesburg, Ohio is an extraordinarily good book. But it is not fiction. It is poetry."--Rebecca West

Sherwood Anderson was born in Camden, Ohio, on September 13, 1876, to Irwin and Emma Smith Anderson. His father was an itinerant harness maker and sometime house painter more interested in swapping barroom tales of Civil War adventures than in providing for a wife and seven children. In 1883 the Andersons settled in Clyde, Ohio, a small town in the heartland of America that later served as a model for Winesburg. There young Sherwood, nicknamed 'Jobby' because he was always ready to work, held any number of odd jobs to help support the family. Although he received a spotty education and never finished high school, Anderson possessed an entrepreneurial spirit and always imagined a glorious future for himself. A year or two after his mother's death in 1895, he journeyed to Chicago and found employment in a warehouse but was soon called up for military service in Cuba at the end of the Spanish-American War. Upon his return, he attended Wittenberg College in Springfield, Ohio, for a year.

In the summer of 1900 Anderson took a job back in Chicago as an advertising copywriter. He satisfied his growing interest in creative writing by turning out essays, sketches, and stories in his spare time. Following his marriage in 1904 to Cornelia Lane (with whom he would have three children), Anderson became head of a mailorder firm in Cleveland and subsequently established his own business in Elyria, Ohio.

Partly as an escape from growing marital and financial problems, he began writing novels around 1910. 'I am one,' he said, 'who loves, like a drunkard his drink, the smell of ink, and the sight of a great pile of white paper that may be scrawled upon always gladdens me.'

Nevertheless, in November 1912 Anderson suffered a complete nervous breakdown and soon returned to Chicago to resume a career in advertising. Over the next years he became one of the rebellious writers (others included Carl Sandburg and Ben Hecht) and cultural bohemians taking part in the so-called 'Chicago Renaissance.' In 1916 he published some of the Winesburg tales in several literary magazines as well as his first novel, the autobiographical Windy McPherson's Son. That same year his marriage ended in divorce, and Anderson wed Tennessee Mitchell, an adventurous, emancipated sculptor. A second novel, Marching Men, followed in 1917, and a book of free-verse poems, Mid-American Chants, came out in 1918.

But it was the appearance of Winesburg, Ohio a year later that secured Anderson's reputation. 'Nothing quite like it has ever been done in America,' said H. L. Mencken of the book that broke all conventions as it laid bare the lives of inhabitants (or 'grotesques' as Anderson called them) of a small Midwestern town. Critic Malcolm Cowley assessed the author's achievement: 'Anderson made a great noise when he published Winesburg, Ohio in 1919. The older critics scolded him, the younger ones praised him, as a man of the changing hour, yet he managed in that early work and others to be relatively timeless. . . . He soon became a writer's writer, the only storyteller of his generation who left his mark on the style and vision of the generation that followed. Hemingway, Faulkner, Wolfe, Steinbeck, Caldwell, Saroyan, Henry Miller . . . each of these owes an unmistakable debt to Anderson.' The author himself reflected: 'With the publication of Winesburg I felt I had really begun to write out of the repressed, muddled life about me.'

The 1920s proved, in part, a productive and rewarding period for Anderson. He soon turned out Poor White (1920), a novel that depicted a small Midwestern town changed by the industrial revolution. In the summer of 1921 he traveled to Europe and met James Joyce, Gertrude Stein, and Ford Madox Ford. The Triumph of the Egg, more of Anderson's naturalistic impressions of American life in tales and poems, was published to critical acclaim in the fall of that year, and in December the distinguished literary magazine The Dial awarded him its first annual prize for literature. Thereafter devoting his energies exclusively to writing, Anderson produced two more novels—Many Marriages (1922) and Dark Laughter (1925), his only bestseller—as well as two more collections of stories, Horses and Men (1923) and Alice and the Lost Novel (1929). In addition, he turned out two personal narratives—A Story Teller's Story (1924) and Tar: A Midwest Childhood (1926)—plus a miscellaneous collection of articles and sketches, Sherwood Anderson's Notebook (1926), and book of prose poems, A New Testament (1927). Yet many of these works received mixed reviews, and the consensus arose that Anderson had failed to live up to his earlier promise.

Moreover, Anderson's prolific output—and peripatetic existence—during the decade took a toll on his relationships. No sooner was he divorced from his second wife in 1924 than the author wed Elizabeth Prall, a bookstore manager he had fallen in love with on a trip to New York City. For a time the newlyweds settled in the French Quarter of New Orleans, where Anderson befriended one of Elizabeth's former employees, a fledgling writer named William Faulkner. Earlier, in Chicago, Anderson had encouraged the young Ernest Hemingway in his writing career, only to have Hemingway parody him in The Torrents of Spring. In 1926 Anderson set out on a lecture tour to help pay for the farm he had bought near Marion, Virginia, which would be his home for the rest of his life. Upon returning from Europe the following year, he resumed lecturing and purchased two Virginia newspapers. Fearing he had written himself out, Anderson spent the next year and a half editing the Smyth County News and the Marion Democrat. Hello Towns!, a fragmentary book of articles and columns culled from the two weekly papers, appeared to poor reviews in 1929, the same year he separated from his third wife (a divorce followed in 1932).

Anderson saw his literary reputation decline in the 1930s. He produced two flawed novels—Beyond Desire (1932) and Kit Brandon (1936)—that embodied his beliefs about both the failure and the promise of American life. Anderson also brought out a final volume of stories, Death in the Woods and Other Stories (1933), as well as three collections of essays—Perhaps Women (1931), No Swank (1934), and Puzzled America (1935). In addition he dramatized Winesburg, Ohio and several other of his most popular works. Home Town, the last of Anderson's books published in his lifetime, came out in 1939. Late in February of 1941 he sailed from New York on a trip to South America with his fourth wife, the former Eleanor Copenhaver, whom he had married in 1933. Taken ill aboard ship, Sherwood Anderson died of peritonitis in a hospital in the Panama Canal Zone on March 8, 1941. He was buried on March 26 in the cemetery in Marion, Virginia. His final work, Sherwood Anderson's Memoirs, appeared posthumously in 1942.
Loading...
or support indie stores by buying on