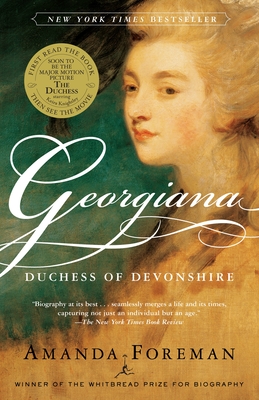 The winner of Britain's prestigious Whitbread Prize and a bestseller there for months, this wonderfully readable biography offers a rich, rollicking picture of late-eighteenth-century British aristocracy and the intimate story of a woman who for a time was its undisputed leader.

Lady Georgiana Spencer was the great-great-great-great-aunt of Diana, Princess of Wales, and was nearly as famous in her day. In 1774, at the age of seventeen, Georgiana achieved immediate celebrity by marrying one of England's richest and most influential aristocrats, the Duke of Devonshire. Launched into a world of wealth and power, she quickly became the queen of fashionable society, adored by the Prince of Wales, a dear friend of Marie-Antoinette, and leader of the most important salon of her time. Not content with the role of society hostess, she used her connections to enter politics, eventually becoming more influential than most of the men who held office.

Her good works and social exploits made her loved by the multitudes, but Georgiana's public success, like Diana's, concealed a personal life that was fraught with suffering. The Duke of Devonshire was unimpressed by his wife's legendary charms, preferring instead those of her closest friend, a woman with whom Georgiana herself was rumored to be on intimate terms. For over twenty years, the three lived together in a jealous and uneasy ménage à trois, during which time both women bore the Duke's children—as well as those of other men.

Foreman's descriptions of Georgiana's uncontrollable gambling, all- night drinking, drug taking, and love affairs with the leading politicians of the day give us fascinating insight into the lives of the British aristocracy in the era of the madness of King George III, the American and French revolutions, and the defeat of Napoleon.

A gifted young historian whom critics are already likening to Antonia Fraser, Amanda Foreman draws on a wealth of fresh research and writes colorfully and penetratingly about the fascinating Georgiana, whose struggle against her own weaknesses, whose great beauty and flamboyance, and whose determination to play a part in the affairs of the world make her a vibrant, astonishingly contemporary figure.

Praise For Georgiana: Duchess of Devonshire…

"Georgiana bursts from the pages of Amanda Foreman's dazzling biography like the force of nature she undoubtedly was — passionate, political, addicted to gambling, and drunk on life. This is a stunning book about an astonishing woman."
— Simon Schama

"A most impressive début. I predict a great future for Amanda Foreman. She is a scholar who matches her learning to a sense of adventure and writes with engaging vitality."
— Michael Holroyd

"A mesmerizing read. . . . The charm of Amanda Foreman's Georgiana is that it gives you all the fascinating detail you want . . . and is at the same time a serious, scholarly work, based on exhaustive archival research."
— Antonia Fraser, Literary Review

"Stunning historical research plus feminine acuity yield a vivid portrait of a shrewd, seductive ancestor of Princess Diana's in an age before democracy or contraception."
— Brenda Maddox, author of Yeats' Ghosts and
Nora: The Real Life of Molly Bloom

"I put this book down entranced by the woman. This is an outstanding début by a young biographer fully in control of her sources, and with an easy, elegant writing style. She tells a tale that calls not only for our admiration but for our compassion."
— Roy Strong, London Sunday Times

"This is an accomplished and well-written biography, remarkably mature for a first effort; diligently researched and entertainingly presented. Amanda Foreman is a writer to watch and one from whom much can be expected."
— Daily Telegraph

Amanda Foreman is a Visiting Research Fellow at Queen Mary, University of London. She won the Whitbread Prize for Georgiana: Duchess of Devonshire, which was adapted for the screen as The Duchess. Educated as an undergraduate at Sarah Lawrence College and with master’s and doctorate degrees in history from Oxford University, she is now married with five children and lives in New York.
Loading...
or
Not Currently Available for Direct Purchase