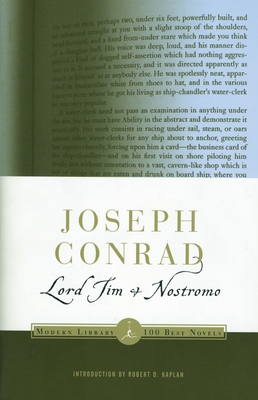 "        Never were Mr. Conrad's felicity of phrase and charm of atmosphere more obvious. . . . A book of the rare literary quality of Lord Jim is something to receive with gratitude and joy."--The New York Times

Originally published in 1900, Lord Jim is one of Joseph Conrad's most complex literary masterpieces. The story of a young sailor whose moment of cowardice haunts him for the rest of his life, Lord Jim explores Conrad's lifelong obsessions with the nature of guilt and the possibility of redemption.
Nostromo is considered by many to be Conrad's supreme achievement, and Conrad himself referred to Nostromo as his "widest canvas." Set in the fictitious South American republic of Costaguana, Nostromo reveals the effects that misguided idealism, unparalleled greed, and imperialist interests can have on a fledging nation. V. S. Pritchett wrote: "Nostromo is the most strikingly modern of Conrad's novels. It is pervaded by a profound, even morbid sense of insecurity which is the very spirit of our age."
Robert D. Kaplan's Introduction explains why the two novels together form Conrad's darkest glimpse into the flawed nature of humankind.

ROBERT D. KAPLAN is a correspondent for The Atlantic Monthly and the author of seven books of travel and foreign affairs that have been translated into a dozen languages, including Balkan Ghosts, The Ends of the Earth, and An Empire Wilderness, all bestsellers, and a collection of essays, The Coming Anarchy. He lectures frequently to the U.S. military.

Joseph Conrad was born in Berdichev, Ukraine, in 1857. After both of his parents died of tuberculosis, Conrad went to live with his uncle in Switzerland. After attending school in Kraków, he joined the French and then the British merchant marines, sailing to exotic destinations like the West Indies and the Congo, which would later become the backdrops for some of his fiction. In 1894 he settled down in England and began his literary career. In 1902 Conrad published his most famous work, Heart of Darkness, and continued to write until his death in 1924.

Robert D. Kaplan is the bestselling author of twenty books on foreign affairs and travel translated into many languages, including Adriatic, The Good American, The Revenge of Geography, Asia’s Cauldron, Monsoon, The Coming Anarchy, and Balkan Ghosts. He holds the Robert Strausz-Hupé Chair in Geopolitics at the Foreign Policy Research Institute. For three decades he reported on foreign affairs for The Atlantic. He was a member of the Pentagon’s Defense Policy Board and the U.S. Navy’s Executive Panel. Foreign Policy magazine twice named him one of the world’s “Top 100 Global Thinkers.”
Loading...
or support indie stores by buying on