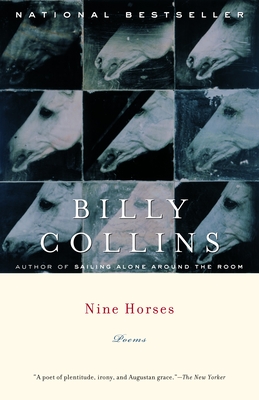 In Nine Horses, Billy Collins, America’s Poet Laureate for 2001–2003, continues his delicate negotiation between the clear and the mysterious, the comic and the elegiac. The poems in this collection reach dazzling heights while being firmly grounded in the everyday. Traveling by train, lying on a beach, and listening to jazz on the radio are the seemingly ordinary activities whose hidden textures are revealed by Collins’s poetic eye. With clarity, precision, and enviable wit, Collins transforms those moments we too often take for granted into brilliant feats of creative imagination. Nine Horses is a poetry collection to savor and to share.

“A poet of plentitude, irony, and Augustan grace.”
—The New Yorker

“A sort of poet not seen since Robert Frost.”
—The Boston Globe

“It is difficult not to be charmed by Collins, and that in itself is a remarkable literary accomplishment.”
—The New York Review of Books

“One appeal of the typical Collins poem is that it’s less able to help you memorize it than to help you remember,
for a little while anyway, your own life.”
—The New York Times Book Review