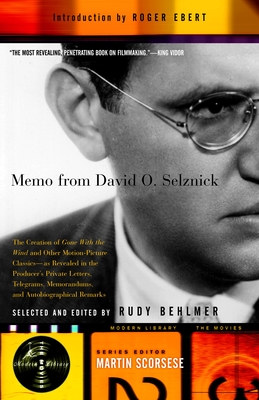 The Creation of Gone With the Wind and Other Motion-Picture Classics--as Reveale d in the Producer's Private Letters, Telegrams, Memorandums and [see f&s] (Modern Library Movies)

"The most revealing, penetrating book on filmmaking I know of . . ."--King Vidor

David O. Selznick was a unique figure in the golden Hollywood studio era. He produced some of the greatest and most memorable American films ever made--notably, Rebecca, A Star Is Born, Anna Karenina, A Farewell to Arms, and, above all, Gone With the Wind. Selznick's
absolute power and artistic control are evidenced in his impassioned, eloquent, witty, and sometimes rageful memos to directors, writers, stars and studio executives, writings that have become almost as famous as his films. Newsweek wrote,"I can't imagine how a book on the American movie business could be more illuminating, more riveting or more fun to read than this collection of David Selznick's memos.

Rudy Behlmer is the author of seven books including Inside Warner Bros. and The Complete Films of Errol Flynn.
Loading...
or
Not Currently Available for Direct Purchase