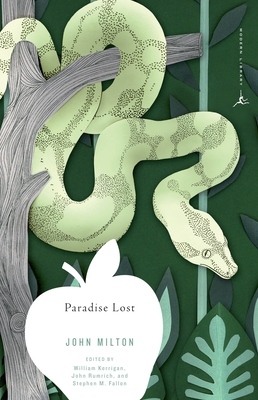 John Milton’s Paradise Lost, an epic poem on the clash between God and his fallen angel, Satan, is a profound meditation on fate, free will, and divinity, and one of the most beautiful works in world literature. Extracted from the Modern Library’s highly acclaimed The Complete Poetry and Essential Prose of John Milton, this edition reflects up-to-date scholarship and includes a substantial Introduction, fresh commentary, and other features—annotations on Milton’s classical allusions, a chronology of the writer’s life, clean page layouts, and an index—that make it the definitive twenty-first-century presentation of John Milton’s timeless signature work.

“In this landmark edition, teachers will discover a powerful ally in bringing the excitement of Milton’s poetry and prose to new generations of students.”—William C. Dowling, Rutgers University

“This magnificent edition gives us everything we need to read Milton intelligently and with fresh perception.”—William H. Pritchard, Amherst College

John Milton (1608-74) was one of England’s greatest poets and a master of polemical prose. He was a private tutor and served as Secretary for Foreign Tongues under Oliver Cromwell.

William Kerrigan, former president of the Milton Society of America and recipient of its award for lifetime achievement, is professor emeritus at the University of Massachusetts.

John Rumrich is the author of Matter of Glory and Milton Unbound. He is Thaman Professor of English at the University of Texas at Austin.

Stephen M. Fallon, author of Milton’s Peculiar Grace and Milton among the Philosophers, is professor of liberal studies and English at the University of Notre Dame.
Loading...
or support indie stores by buying on