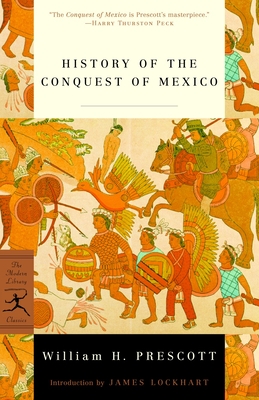 History of the Conquest of Mexico (Modern Library Classics) (Paperback)

"It is a magnificent epic," said William H. Prescott after the publication of History of the Conquest of Mexico in 1843. Since then, his sweeping account of Cortés's subjugation of the Aztec people has endured as a landmark work of scholarship and dramatic storytelling. This pioneering study presents a compelling view of the clash of civilizations that reverberates in Latin America to this day.

"Regarded simply from the standpoint of literary criticism, the Conquest of Mexico is Prescott's masterpiece," judged his biographer Harry Thurston Peck. "More than that, it is one of the most brilliant examples which the English language possesses of literary art applied to historical narration. . . . Here, as nowhere else, has Prescott succeeded in delineating character. All the chief actors of his great historic drama not only live and breathe, but they are as distinctly differentiated as they must have been in life. Cortés and his lieutenants are persons whom we actually come to know in the pages of Pres-cott. . . . Over against these brilliant figures stands the melancholy form of Montezuma, around whom, even from the first, one feels gathering the darkness of his coming fate. He reminds one of some hero of Greek tragedy, doomed to destruction and intensely conscious of it, yet striving in vain against the decree of an inexorable destiny. . . . [Prescott] transmuted the acquisitions of laborious research into an enduring monument of pure literature."

William Hickling Prescott, the renowned American historian who chronicled the rise and fall of the Spanish empire, was born in Salem, Massachusetts, on May 4, 1796. His grandfather had commanded colonial forces at the Battle of Bunker Hill during the American Revolution; his father was a highly respected judge and philanthropist. Prescott was tutored in Latin and Greek by the rector of Trinity Church in Boston and entered Harvard in 1811. In a bizarre accident, Prescott was blinded in the left eye by a crust of bread thrown in a dining-hall fracas. He abandoned plans to study law but went on to graduate in 1814 having earned membership in Phi Beta Kappa. While traveling abroad the following year Prescott temporarily lost the sight in his right eye. With his vision permanently impaired, he aspired to the life of gentleman-scholar. Prescott launched a career as a man of letters in 1821 with an essay on Byron that appeared in the North American Review. Over the next two decades he contributed regularly to the prestigious Boston literary journal. His most important articles and reviews, including seminal pieces on the theory and practice of historical composition, were later collected in Biographical and Critical Miscellanies (1845) and Critical and Historical Essays (1850).

Under the influence of George Ticknor, a friend and mentor who taught European literature at Harvard, Prescott began learning Spanish in 1824. Engrossed by the history of Spain, he committed himself to tracing its development into a world power. Employing secretaries to read him manuscripts sent from Spanish archives, Prescott set about writing a work of sound scholarship that would also interest a general audience. A phenomenal memory allowed him to compose whole chapters in his mind during morning horseback rides. Later he recorded them on paper using a noctograph, a special stylus for the blind. More than a decade later he finished The History of the Reign of Ferdinand and Isabella the Catholic (1837), which enjoyed tremendous critical and popular success on both sides of the Atlantic.

Prescott's fame gained him entrée into Spanish intellectual circles, greatly facilitating research on his next book, History of the Conquest of Mexico (1843), a sweeping account of Cortés's subjugation of the Aztec people. "Regarded simply from the standpoint of literary criticism, the Conquest of Mexico is Prescott's masterpiece," judged his biographer Harry Thurston Peck. "More than that, it is one of the most brilliant examples which the English language possesses of literary art applied to historical narration. . . . [Prescott] transmuted the acquisitions of laborious research into an enduring monument of pure literature." Pulitzer Prize-winning historian Daniel J. Boorstin agreed: "The enduring interest in Prescott's Conquest of Mexico comes less from his engaging survey of Aztec civilization than from his genius for the epic. . . . Though Prescott has been called the nation's first 'scientific historian' for his use of manuscript sources, he would live on as a creator of literature."

Prescott completed his pioneering study of Spanish exploits in the New World with the History of the Conquest of Peru (1847), a vivid chronicle of Pizarro's tumultuous overthrow of the Inca empire. "The Conquest of Peru represents an author's triumph over his materials," observed Donald G. Darnell, one of the historian's several biographers. "Prescott exploits to the fullest any opportunities for dramatic effects that history might provide him. . . . The description of the Inca civilization, particularly its wealth, the precise explanation of the cause of the conflict between the conquerors, and the depiction of the Spanish character—these together with the careful research, the sheer abun dance of anecdotes, and the exploitation of primary materials all contribute to the history's continuing popularity."

Prescott devoted his final years to chronicling the decline of the Spanish empire. He published The Life of Charles the Fifth after His Abdication (1856), a continuation of William Robertson's The History of the Reign of the Emperor Charles the Fifth (1769), but only managed to finish the first three volumes of The History of the Reign of Philip the Second (1855-58). William H. Prescott died of a stroke at his home in Boston on January 29, 1859. In assessing his achievements, Daniel J. Boorstin wrote: "One of Prescott's greatest feats as a 'scientific' historian was to depict the scenes of his drama so vividly without ever having been there—for he never visited Spain, Mexico, or Peru. . . . Prescott created from the rawest of raw material, laboring under physical handicaps and displaying a single-minded courage with few precedents in the annals of literature. . . . He had to discover the landscape, conceive new heroes, and mark their own paths through time. The story of how he made his histories was itself a kind of epic."
or
Buy Here
Copyright © 2020 American Booksellers Association