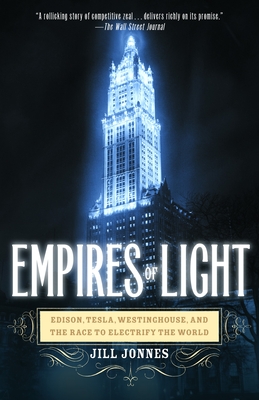 Edison, Tesla, Westinghouse, and the Race to Electrify the World

The gripping history of electricity and how the fateful collision of Thomas Edison, Nikola Tesla, and George Westinghouse left the world utterly transformed.

In the final decades of the nineteenth century, three brilliant and visionary titans of America’s Gilded Age—Thomas Edison, Nikola Tesla, and George Westinghouse—battled bitterly as each vied to create a vast and powerful electrical empire. In Empires of Light, historian Jill Jonnes portrays this extraordinary trio and their riveting and ruthless world of cutting-edge science, invention, intrigue, money, death, and hard-eyed Wall Street millionaires. At the heart of the story are Thomas Alva Edison, the nation’s most famous and folksy inventor, creator of the incandescent light bulb and mastermind of the world’s first direct current electrical light networks; the Serbian wizard of invention Nikola Tesla, elegant, highly eccentric, a dreamer who revolutionized the generation and delivery of electricity; and the charismatic George Westinghouse, Pittsburgh inventor and tough corporate entrepreneur, an industrial idealist who in the era of gaslight imagined a world powered by cheap and plentiful electricity and worked heart and soul to create it.

Edison struggled to introduce his radical new direct current (DC) technology into the hurly-burly of New York City as Tesla and Westinghouse challenged his dominance with their alternating current (AC), thus setting the stage for one of the eeriest feuds in American corporate history, the War of the Electric Currents. The battlegrounds: Wall Street, the 1893 Chicago World’s Fair, Niagara Falls, and, finally, the death chamber—Jonnes takes us on the tense walk down a prison hallway and into the sunlit room where William Kemmler, convicted ax murderer, became the first man to die in the electric chair.

Praise For Empires of Light: Edison, Tesla, Westinghouse, and the Race to Electrify the World…

“A rollicking story of competitive zeal . . . [the book] delivers richly on its promise: chronicling a vital stage of American progress as seen through the lives of three mavericks.”
—The Wall Street Journal

“Entertaining and informative . . . a lively account of how personal ambitions and hostilities fueled the interaction between science and business during the long War of the Electric Currents.”
—The Los Angeles Times Book Review

“Jonnes does a fine job portraying these men against the historical background of the Gilded Age in this engaging, well-documented volume.”
—Chicago Tribune

“A crackerjack account of the race for electrification . . . [Empires of Light] is a story of the collision of business and technology, and Jonnes tells it well.”
—San Francisco Chronicle (Best Books of 2003)

“Jonnes re-creates this venomous rivalry in a delightful book that may remind readers of E.L. Doctorow’s novel Ragtime. . . . but Empires of Light is no fiction; it’s a meticulously researched narrative in which famous people go baying after an elusive goal: to power cities by harnessing a hidden force wrested from the atmosphere.”
—Discover

“With Empires of Light, Jill Jonnes joins the genre of academicians who truly document for the nation’s collective memory the significant struggles that led to commonplace conveniences of today.”
—The Baltimore Sun

“[Empires of Light] moves seamlessly back and forth in time. . . . Jonnes is a fine biographer and an excellent scientific and industrial historian. She’s done a superb job of telling an important story.”
—Rocky Mountain News

“Compelling . . .Jill Jonnes has delivered an absorbing tale about the advent of the power grid.”
—The San Diego Union-Tribune

“Jonnes lucidly lays out the technical issues, playing plenty of attention to the personalities involved to liven things up for the general reader.”
—Newsday.com

“Jill Jonnes’s Empires of Light is the most exciting science/business adventure to come out in the past decade. Once she gets past the initial discoveries of the properties of electricity, her brilliant storytelling pulls the reader into a gripping, real-life turn-of-the-century tale full of twists, turns, ironies, dirty tricks, breakthrough challenges, accomplishments, tragedies and triumphs.”
—Houston Chronicle

“An amazing book, one so entertaining that i treads almost like a novel . . . a powerful narrative that captures the tension of a time long gone.”
—San Jose Mercury News

“Jonnes serves up plenty of color in an engaging and relaxed style.”
—Publishers Weekly

“A very accessible and informative historical account that will be fascinating reading for a general audience as well as those with a more specialized interest.”
—Booklist

“Compelling . . . Like the late Stephen Ambrose, historian Jill Jonnes paints her story with a broad canvas and populates it with titans.”
—BookPage

“A thoroughly engaging and highly informative account of three inventors who pioneered the production and distribution of electricity. Without these three engineers the world would simply not be what we know today.”
—Henry Petroski, author of The Evolution of Useful Things

“Jill Jonnes’ Empires of Light is the captivating—no, let’s say electrifying—saga of the War of the Electric Currents fought at the close of the nineteenth century with typical Gilded Age excess by Thomas Edison, Nikola Tesla, and George Westinghouse. From the electrification of J. P. Morgan’s New York mansion to Westinghouse’s subjugation of Niagara Falls, Jonnes explains in human terms how alternating current achieved dominance over direct current, a victory of incalculable importance in the history of the world—and she tells the story with great, at times even macabre, verve, as in her account of the invention of the electric chair and its horrifying first use. Along the way she solves numerous little mysteries of electric power, among them why Broadway became nicknamed ‘The Great White Way.’ ”
—Erik Larson, author of In the Garden of Beasts and The Devil in the White City

“Empires of Light is a fascinating and vivid portrait of a tumultuous era. In a fast-paced narrative, Jill Jonnes recreates the personalities, technologies, and corporate intrigues that changed America by—literally—electrifying the nation.”
—Lauren Belfer, author of City of Light

Jill Jonnes is an author and historian with a Ph.D. from Johns Hopkins University. She has received awards from the Ford Foundation and the National Endowment for the Humanities, and is the author of South Bronx Rising and Hep-Cats, Narcs, and Pipe Dreams. She lives with her family in Baltimore, Maryland.
Loading...
or support indie stores by buying on
(This book is on backorder)