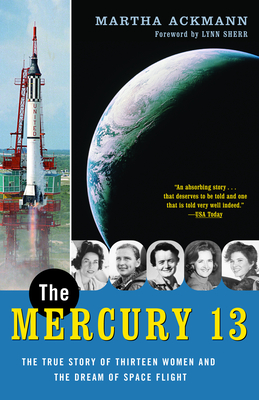 For readers of The Astronaut Wives Club, The Mercury 13 reveals the little-known true story of the remarkable women who trained for NASA space flight.

In 1961, just as NASA launched its first man into space, a group of women underwent secret testing in the hopes of becoming America’s first female astronauts. They passed the same battery of tests at the legendary Lovelace Foundation as did the Mercury 7 astronauts, but they were summarily dismissed by the boys’ club at NASA and on Capitol Hill. The USSR sent its first woman into space in 1963; the United States did not follow suit for another twenty years.

For the first time, Martha Ackmann tells the story of the dramatic events surrounding these thirteen remarkable women, all crackerjack pilots and patriots who sometimes sacrificed jobs and marriages for a chance to participate in America’s space race against the Soviet Union. In addition to talking extensively to these women, Ackmann interviewed Chuck Yeager, John Glenn, Scott Carpenter, and others at NASA and in the White House with firsthand knowledge of the program, and includes here never-before-seen photographs of the Mercury 13 passing their Lovelace tests.

Despite the crushing disappointment of watching their dreams being derailed, the Mercury 13 went on to extraordinary achievement in their lives: Jerrie Cobb, who began flying when she was so small she had to sit on pillows to see out of the cockpit, dedicated her life to flying solo missions to the Amazon rain forest; Wally Funk, who talked her way into the Lovelace trials, went on to become one of the first female FAA investigators; Janey Hart, mother of eight and, at age forty, the oldest astronaut candidate, had the political savvy to steer the women through congressional hearings and later helped found the National Organization for Women.

A provocative tribute to these extraordinary women, The Mercury 13 is an unforgettable story of determination, resilience, and inextinguishable hope.

Praise For The Mercury 13: The True Story of Thirteen Women and the Dream of Space Flight…

“The Mercury 13 ought to be on the shelf next to The Right Stuff as a glaring and embarrassing counterpoint to the triumph of the boys’ club and its fighter jocks. Ackmann has done outstanding investigative reporting.” —William E. Burrows, author of This New Ocean: The Story of the First Space Age
“[A] sharply pointed narrative [about how thirteen] highly skilled fliers were grounded, leaving it to the Russians to put a woman in space fully twenty years before the American government saw fit to do so. A shameful episode exposed with thoroughness and a graceful pen." —Kirkus Reviews
“The Mercury 13 women were not only dedicated and determined, they were enormously talented. To read about their accomplishments and to discover their passion to fly is to recognize an incredible lost opportunity.” —from the Foreword by Lynn Sherr

Martha Ackmann teaches at Mount Holyoke College, is a frequent columnist, and has written for publications including The New York Times, The Boston Globe, the Chicago Tribune, and the Los Angeles Times. Ackmann is co-recipient of the Amelia Earhart Research Scholars Grant. She lives in western Massachusetts.

Lynn Sherr, correspondent for the ABC News program 20/20, covered NASA and the space program in the 1980s, anchoring and reporting on all the early shuttle missions, through the Challenger explosion and the subsequent Rogers Commission hearings. Sherr was a semifinalist in the (now abandoned) Journalist-in-Space competition. She lives in New York.
Loading...
or support indie stores by buying on