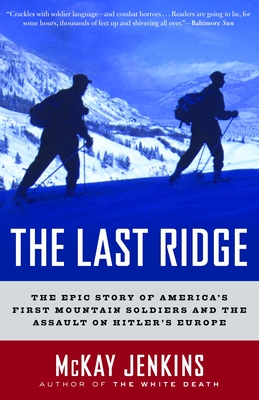 When World War II broke out in Europe, the American army had no specialized division of mountain soldiers. But in the winter of 1939–40, after a tiny band of Finnish mountain troops brought the invading Soviet army to its knees, an amateur skier named Charles Minot “Minnie” Dole convinced the United States Army to let him recruit an extraordinary assortment of European expatriates, wealthy ski bums, mountaineers, and thrill-seekers and form them into a unique band of Alpine soldiers. These men endured nearly three years of grueling training in the Colorado Rockies and in the process set new standards for both soldiering and mountaineering. The newly forged 10th Mountain Division finally faced combat in the winter of 1945, in Italy’s Apennine Mountains, against the seemingly unbreakable German fortifications north of the Gothic Line. There, they planned and executed what is still regarded as the most daring series of nighttime mountain attacks in U.S. military history, taking Mount Belvedere and the sheer, treacherous face of Riva Ridge to smash the linchpin of the German army’s lines.

Drawing on unique cooperation from veterans of the 10th Mountain Division and a vast archive of unpublished letters and documents, The Last Ridge is written with enormous warmth, energy, and honesty. This is one of the most captivating stories of World War II, a blend of Band of Brothers and Into Thin Air. It is a story of young men asked to do the impossible, and succeeding.

Praise For The Last Ridge: The Epic Story of America's First Mountain Soldiers and the Assault on Hitler's Europe…

“The Last Ridge is the breathtaking story of how one man’s vision, and the sheer courage of the legendary 10th Mountain Division, helped change the course of World War II in Europe. Among the war’s countless acts of bravery and sacrifice, this one stands out, and McKay Jenkins brings it to life in his riveting account.”
—Senator John McCain

“The 10th Mountain Division was the only American Alpine unit to fight during World War II, and its heroic and daring exploits during the final months of the Italian campaign are fully documented by McKay Jenkins in this stirring, first-rate account of men at war.”
—Carlo D’Este, author of Eisenhower: A Soldier’s Life

“Stymied by army bureaucrats, forced to climb snowfields without ice axes or crampons, trained in skills that were never properly exploited, the soldiers of the 10th Mountain Division nonetheless became the stuff of myth. Without McKay Jenkins’s meticulous research, the achievements and eccentricities of this remarkable group of men could easily have been forgotten. Instead, they have been brought to life.”
—Anne Fadiman, author of The Spirit Catches You and You Fall Down

“Few have written about the Army’s elite 10th Mountain Division, and no one has done so as dramatically and with such passion and insight as McKay Jenkins. The perfect war story has, at long last, found the perfect storyteller.”
—Andrew Carroll, editor of War Letters: Extraordinary Correspondence from American Wars

“The Last Ridge is one of the very best books yet written about any part of the World War II story. My friend the late Stephen Ambrose would be proud of this work about one of the most fascinating yet little-known records of the mountain ski patrols—both in war and in the peacetime that followed.”
—Senator George McGovern

“The Last Ridge is a great untold story of mountaineering and war. It’s a terrific read, sharp with characters, full of real drama, and, best of all, it’s true.”
—Richard Preston, author of The Hot Zone

“The Last Ridge, based on skillful interviews with the survivors, is a fine account of a great story, long overdue in the telling, and very well told.”
—Peter Matthiessen, author of The Snow Leopard

McKay Jenkins holds degrees from Amherst, Columbia’s Graduate School of Journalism, and Princeton, where he received a Ph.D. in English. He is also the author of The White Death and the editor of The Peter Matthiessen Reader. An associate professor of English and journalism at the University of Delaware, Jenkins lives with his wife and son in Baltimore.
Loading...
or support indie stores by buying on
(This book is on backorder)